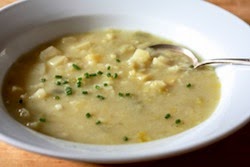 This soup is so simple and so good, there's not even that much to add here in the introductory note, though I will mention that I usually use boxed chicken broth but instead made it this time with vegetarian bouillon (I had to type that, like, 5 times to get the spelling right) on account of Anni being a vegetarian. I love, love, love this brand--more than any of the boxed broth you can buy. You could, though, use plain water and up the salt a bit to compensate.

Melt the butter in a soup pot over medium-low heat, add the leeks, and stir them as they begin to cook. Ideally they'll have some water still clinging to them: they'll kind of steam and sauté simultaneously, and you can cover the pot to let them get tender (around 10 minutes), stirring occasionally while you prep the potatoes. Now add the potatoes, the broth or water, and some amount of salt (depending on how salty the broth is). Bring the coup to a boil, then reduce the heat and simmer, covered, for half an hour until the potatoes are very tender.

Puree some or all of the soup, using an immersion blender or a regular blender (I use an immersion blender and puree about half of it, since I like to leave some chunks of potato). Stir in the milk and taste the soup for salt: given its great simplicity, it is really important that this soup has enough salt; if it tastes like it's missing something, it is, and what it's missing is more salt. Garnish with chives (if you like) and serve.
Posted by BenBirdy1 at 9/24/2005 04:34:00 PM