Baked (but gooey) Macaroni and Cheese 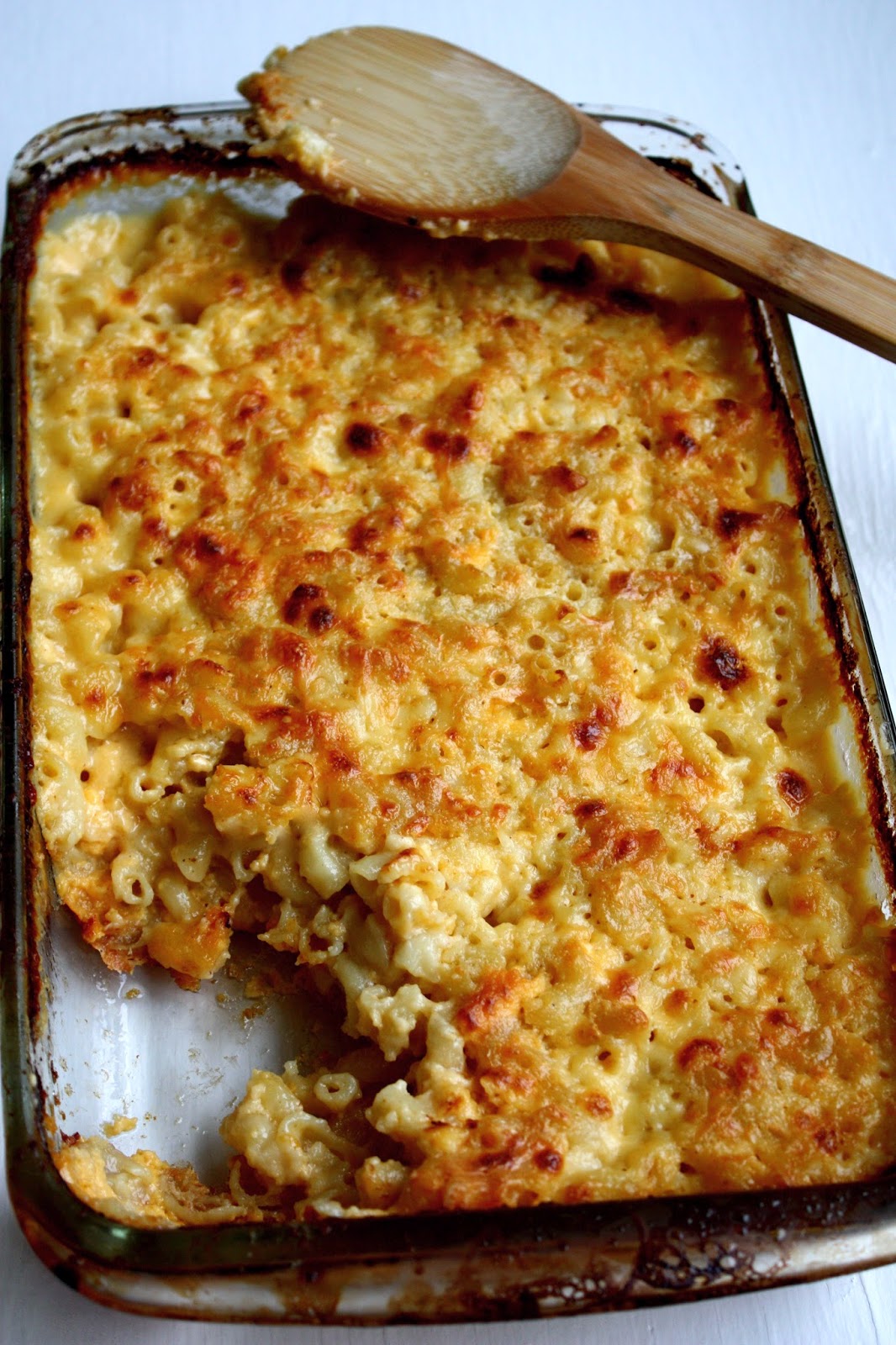 Sometimes you need to offer a comforting dinner. For example, say baby Anna comes to visit your house on the banks of plum creek and she tears up all the paper dolls so you tell Laura to let her play with Charlotte, her beloved rag doll, only then Anna doesn't want to give Charlotte up, and so you insist that Laura's too big for dolls anyways and you make her give Anna the doll, which you later find abandoned in a thawing mud puddle? That kind of day? Exactly.

Okay, so maybe the child's name was Birdy and not Laura, and the toy in question was not Charlotte (which is, oddly, the name of Birdy's doll too) but a set of Sesame Street Aqua Doodle Mini Mats. Still. There are days when I can't quite believe myself. I mean here's Birdy, who had practically been babysitting our friends' toddler for two days, offering him an endless and good-natured supply of entertainment and activities and toys and attention. And then I have to go and offer a toy she's not ready to give up, for him to take for keeps. When she balked, I hissed at her ("I haven't seen you use that toy in years!" "No, Mama, it's not true, I do actually still use it!), and then finally agreed that she could keep the Sesame Street Aqua Doodle Mini Mats--but in a way that took more than it gave back, if you know what I'm saying. Poor Birdy. She was so miserable, and I had to shake myself by the shoulders to rouse my dozing compassion. "I'm sorry I made you feel bad," I finally said, and meant it. "It took me a while to get over my own idea about what should happen, but now I see that you were right to speak up about what you wanted, and I'm glad you did. You are a really generous friend." Birdy slumped against me in tearful relief, and I felt like a gigantic calloused heel that no Ped Egg on earth was ever going to smooth over.

What does any of this have to do with macaroni and cheese? Well, on a Sunday afternoon when a gentle, misty rain is falling and the world is green and lovely but also a little end-of-the-weekend melancholy, it seems like macaroni and cheese is called for. And while the boxed kind is fine for lunch--"cheap and cheerful," as my mum would say--it has never struck me as a very good dinner, although that may be because I just don't love it. It's not snobbery, and don't get me wrong, I'll happily enough eat a bowl of Annie's or Trader Joe's macaroni in a pinch, but I don't really understand why kids treat it like the blue jeans of the food world--this kind of versatile and universally appreciated thing--when boxed mac and cheese always seems kind of powdery and barfy-smelling if you ask me. But maybe that’s because I grew up on Stouffer's Macaroni and Cheese, which I still take to be the last word on molten deliciousness. (Could it be because--I just Googled this--one 6-ounce serving has 16 grams of fat? Could that account for the unearthly yum factor? Could be.)

And so I offer you this homemade approximation of Stouffer's that is super-easy and super-tasty--beautifully browned and crispy outside, and perfectly creamy and unctuously cheesy inside--if not exactly wildly nutritious or inexpensive. Still, because you don't need to boil the macaroni first, it doesn't create a zillion dirty dishes, and it cooks in the oven, which means none of that last-minute boiling and draining. I know I must seem like the Sybil of the recipe world--as if I have multiple food personalities, and one of them is Michael Pollan and the other is Rodney Dangerfield. But that's kind of how it is for me. We think a lot about where our food comes from and how and by whom it gets produced and distributed--and then also there's an occasional straying towards Velveeta. Which is, as you may know, a "shelf stable" cheese product. The second ingredient of which is water. Which is not bad for you, of course, water, but it's not really what you expect your cheese to be made out of.  Oh, but the way it melts! So smooth, so orange. If you use Velveeta and have leftovers, melt some in the microwave with bottled salsa, then scoop it up with tortilla chips. This is the chili con queso dip that Avra Jordano's mother made in a crockpot for my surprise sweet-sixteen party, and it's the thing I have craved every day of my life since. But if you can't bring yourself to use Velveeta, or half Velveeta, like I do, then use all cheddar and allow your righteousness to distract you from the slightly grainy texture of your macaroni and cheese. It will still be yummy.

In the end, I figure the Velveeta and the local milk delivered in a glass bottle kind of balance each other out here. Right?

Adapted from the recipe "Creamy Macaroni and Cheese," printed in the New York Times on January 4th, 2006. That recipe uses nutmeg, cayenne, and dry mustard--but the flavors of the Frank's hot sauce and the bit of wet mustard are exactly what I'm wanting in a pan of mac and cheese. A "bloop" is something like a half a teaspoon--which is probably the same amount, actually, as "a few good shakes." Use regular elbow macaroni for this: I don't know that whole wheat pasta or other shapes will cook through when baked this way.

2 tablespoons butter, divided
1 cup cottage cheese (not low-fat)
2 cups milk (not skim)
a bloop of brown or Dijon mustard
a few good shakes of Frank's Red Hot, or a not-too-spicy hot sauce of your choosing
1 scant teaspoon kosher salt (or half as much table salt)
1 pound cheese, grated (I use half grated sharp cheddar, half cubed Velveeta)
1/2 pound elbow macaroni, uncooked

Heat the oven to 375, and position an oven rack a third of the way down from the top. Use 1 tablespoon of butter to grease an 8- or 9-inch round or square baking pan (I use a Pyrex pan that is actually 7 by 11 or so--close enough). It's actually easiest just to melt the butter in the pan in the oven, and then swirl it around to coat the bottom and sides.

In a blender, puree the cottage cheese, milk, mustard, Frank's, and salt. Combine this mixture in a large bowl (ideally one with a spout) with the raw macaroni and the cheese, reserving 1/4 cup grated cheese for topping, which you'll do halfway through the baking. Pour into the prepared pan, cover tightly with foil, and bake for 30 minutes. (Unless you love the smell of milk burning on your oven floor, you might want to put a foil-covered baking sheet on the rack beneath to catch any puddles of spill-over. This is an idea I am having only in hindsight, if you know what I mean.)

Uncover the pan and stir gently, redistributing the pasta and sauce evenly, and unsticking any macaroni that has attached itself to the pan. Dot with the remaining butter, sprinkle with the remaining cheese, and bake another 30 minutes, at which point it should be well browned and beautiful. Cool for 15 minutes before serving.
Posted by BenBirdy1 at 9/23/2005 06:06:00 PM