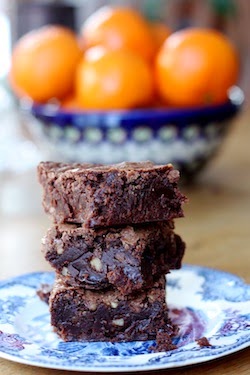 Michael is our household brownie baker, and in the course of photographing the baking of the brownies, I realized I didn't know a thing about him. "You use cake flour? Really?" I was incredulous. Who even knew we had cake flour? "You add baking powder? Are you kidding?" Back in the Pleistocene era, when I was the brownie baker, I used no leavening at all. Watching Michael, everything was news to me.

Nothing about me, however, was news to Michael. Like, for instance, the way I'm such a controlling b-yotch.

"So you don't toast the pecans?"

"Not even for a few minutes, just to crisp them up a little and bring out the flavor?"

My personality can be like mice in the walls of my own life--the way you hear them scratching around and squeaking and chewing up the insulation and you're not sure if they're simply a nuisance or more of an actual problem and you think they're gone but then they're back and there's just nothing to do. But trap them, which is where the metaphor falls apart a little bit, I guess. The other day, the kids were reminiscing, in a comically good-natured way, about various occasions when I've spoken sharply or lost my patience with them. Ben was remembering this one time when he was four--hello, seven years ago!--and he lied about how many episodes of Busy Town he had watched, and then we didn't let him have dessert. I swear this represents the one time we actually punished him, in the classic style of straight-to-bed-without-your-supper punishment, but he ended up hurting his own feelings a little bit, what with his self-sorry nostalgia and all, and then that hurt Birdy's feelings, and she suggested that he should get a little extra dessert right that minute to make up for it. She yanked some candy off of her (very stale) gingerbread house for him, and only later did I think: What a beautiful act of empathy. Because in the moment, all the hurt feelings actually ended up--hello, PMS!--hurting my feelings. "Do you guys just have, like, a catalogue in your heads of all the ways I've ever been lame? And all the billions of nice moments are just pasted over with this handful of bad ones?" And then my hurting my own feelings hurt the kids' feelings, and they came and sat in my lap and petted me. And I felt like a peevish jerk--but a deeply loved one.

But back to the brownies. "Would you really describe those as 'moist fudgy crumbs'? I asked Michael, looking over his shoulder at the batter-coated toothpick, and he shrugged. "No, but I'm calling them anyway. These are done." And they were. And they were fantastic, as always: dense, fudgy, and rich, and studded with tart cherries and pecans that were plenty crunchy and flavorful. Perfect.

This is based on a brownie recipe from Cooks Illustrated, although the cherries are Michael's addition. The only tricky thing here is figuring out when they're done: the original recipe has you checking them at 20 minutes, at which point they are always still fully molten and not even thinking about being done. Even at 25, they are more liquid in the center than wobbly--I think it's because of the added moisture from the soaked cherries. Start checking them at 25 minutes, but be prepared to bake them up to 10 minutes longer: you want something between a batter-coated toothpick and a clean toothpick. You know: moist, fudgy crumbs. Better to underbake than overbake, IMHO.

Soak the cherries: put them in a bowl, cover them with boiling water, and leave them while you prepare the batter.

In a heat-proof bowl over barely simmering water, melt the chocolate and butter, stirring now and then, until smooth. Set it aside to cool.

In another bowl, whisk together the flour, baking powder and salt.

Whisk the sugar into the cooled chocolate mixture, then whisk in the eggs and vanilla, and fold in the flour until just combined. Drain the cherries well, and fold them, with the pecans, into the batter.

Scrape the batter into the pan and bake until the brownies are done. You don't want them wobbly in the center, but you're not looking for them to be totally firm either or they'll be overdone. This is tricky, and will likely take 25-35 minutes (ours were perfect at 33 minutes). Cool in the pan completely before cutting with a plastic knife (Michael swears they don't stick that way).
Posted by BenBirdy1 at 9/24/2005 05:09:00 PM