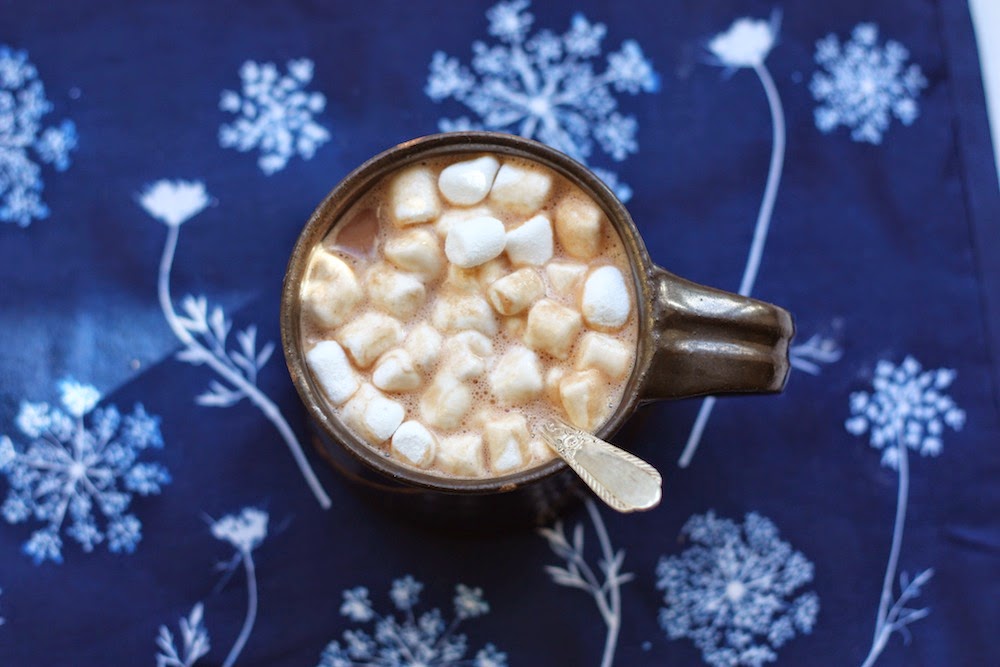 We are a people of many rituals. Which means that, come a wintery forecast, spoons get put in the freezer, ice cubes tossed out of doors and pajamas worn inside out to bring on the snow. And the snow, thus brought on, itself brings on the customary warm-up snack of hot chocolate and popcorn. First the kids gear up to help Michael shovel: from what I can tell, peering out the window, this seems to mean a great deal of helpful lying on top of snow piles, also a great deal of helpful eating of snow, and some helpful bouts of actual shoveling. I require myself to stay indoors on account of the important job of the making of the hot chocolate. Much as I'd love to be out there enjoying the briskness with everybody, wiping my nose on the sleeve of my nylon jacket and pulling shovel muscles in my groin and running away from the handful of snow that a hand wants to shove into the neck of my jacket--well, somebody has to martyr themselves and stay inside the cozy house in their pajamas and tend the woodstove and pop actual kernels of corn, heating them up just right so that the tiny drop of residual moisture steams the corn into perfect puffs of snackability, which is quite amazing when you come to think of it. Also, there is the elaborate making of creamy, decadently rich hot chocolate from scratch. A feat which hushes everyone with amazement, so please don't tell them that it's just three ingredients or I will be banished from my hallowed and mysterious indoor sainthood.

And then there’s the marshmallow issue. Here's what I think: if you're vegan and/or not of the horse-hoof persuasion, then, okay, you can go ahead and buy the $10 seaweed-gelled marshmallows at Whole Foods. Otherwise, I think Jet-Puffed should be just fine. Am I wrong about this? I mean, it's marshmallows. I'm assuming they're not a significant part of anyone's diet. I'm assuming that everyone, like us, buys two bags a year: one in the winter for hot chocolate and one in the summer for camping. Because everyone makes hot chocolate and camps, and everyone gets out the rubberbanded half-bag of winter marshmallows in July, which have melted into a single taffyish mass with individual lumps extractable only with a great stickying of the hands, and everyone then decides to go ahead and invest in a new bag. Because everyone is exactly like us, and I trust I'm right about this.

Okay, I know that's not true, because I see people at Whole Foods with the ten-dollar marshmallows in their carts. My friend Megan used to daydream about setting up a radical charitable organization at Whole Foods: every times you picked out something that was a patently foolish waste of money, an alarm would sound, a giant pair of tongs would descend to yoink the offending item from your cart, and you'd be forced to write a check for that amount to a charity of your choosing. Expensive marshmallows, organic blue raspberry Slurpees, spelt kitty litter: blang blang blang blang, yoink, enforced charitable donation. 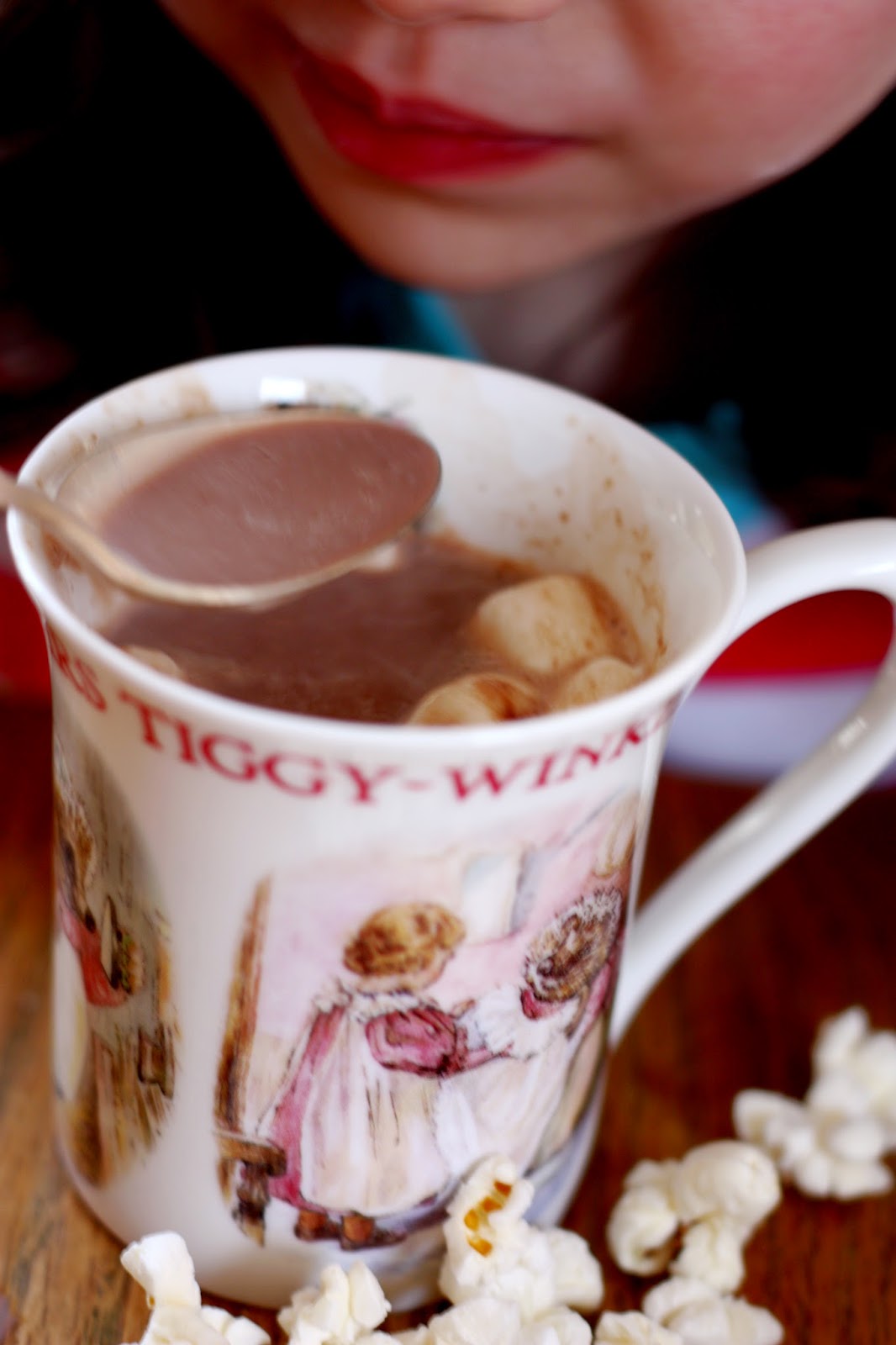 But then again, my hypocrisy really knows no bounds because: a) I have actually made marshmallows from scratch, whipping gelatin into sweetened egg whites until a hoofy fog filled the kitchen as if thousand orphaned horse feet had clip-clopped into the room with us. Or like we were suddenly in an Upton Sinclair novel. b) I believe that every purchase you make is an investment in the world you want to live in. So, would I rather invest in Kraft or in some independent little candy company where an earnest someone stirs copper kettles full of hoofless marshmallows? Exactly. And c) You could say the same about the hot chocolate itself. I mean, when did I become a person who whisked actual chocolate into it? When we were kids, the mix was plenty good enough. We stirred big powdery spoonfuls of Nestle Quick into our milk, creating that strange slurry that never quite amalgamated, so that you'd drink a big slurp and a milky bubble would pop open to fill your lungs with a puff of chocolate dust. So?

This was the same childhood during which we tossed our Styrofoam meat trays into the fire to watch them sizzle and burn, contracting like toxic Shrinky Dinks and sending their plumes of green smoke to the heavens in a poisonous parody of the Northern Lights. Yet another cheap thrill my kids will never enjoy. But at least they've got cheap marshmallows to float in their good hot chocolate. And ritual. We've got that. 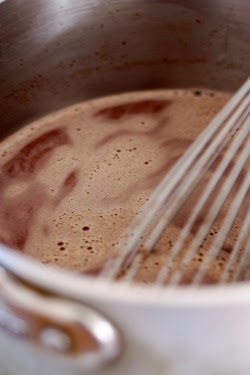 I'm assuming that this is one of those the-better-the-chocolate-you-use-the-better-the-result situations. We use middle-of-the-road Ghiradelli chips from the supermarket, and still this is decadent. I also assume that some folks may want to increase or decrease the amount of chocolate. Fine. Sometimes we use 1/2 teaspoon of mint extract instead of the vanilla. Then you can serve it with peppermint-stick stirrers and blow your kids' minds.

In a medium-sized pot over medium-low heat, mix the milk with the chocolate chips, whisking occasionally, until the chips are melted and merged with the steaming-hot milk. Whisk in the salt and vanilla and serve with marshmallows for topping.