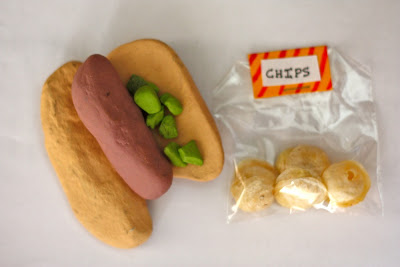 Here's what Ben gave Ava for her birthday. He spent ages on the Cape looking for the perfect stones and shells. It was the counterpoint to her Christmas present to him, which she'd made from rocks she'd found on a beach in Ireland. 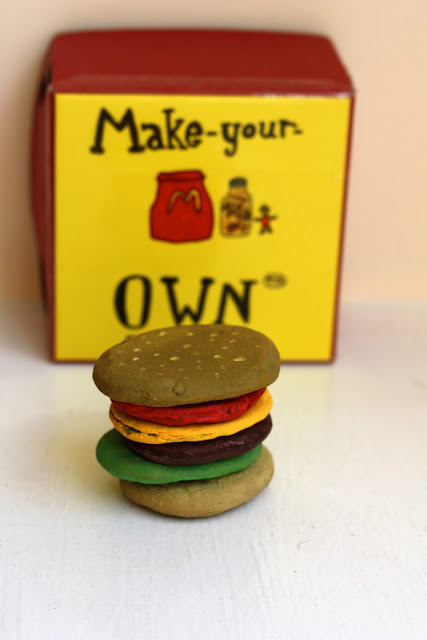 Meanwhile, there are some other things I've been enjoying in these last days of summer. 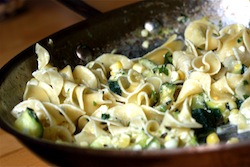 This summer pasta with corn, zucchini, lime, and mint, for one. Not to be immodest, but it is just insanely fragrant and summery and delicious, and so perfect for nights when you've got a couple zukes, a couple ears of corn, and loads of fresh herbs.

Wild grapes, which, if you live in New England, are happening early, as in now.

This lip balm, which I've now given to a couple of people too. The color is perfect; it's fragrance-free but smells great; it's very nicely moist; everybody loves it.

This book, which is like a classic quietly apocalyptic middle-school coming-of-age story crossed with a more loudly apocalyptic global-warming story. I know. It doesn't sound good, but I absolutely loved it, and then Michael loved it too. Don't worry--it's not at all like those urban end-of-the-world stories where everybody's lurking around a burnt-out New York in the dark with guns and rabid dogs. It's more like everyday misery refracted through the end times. Hm. Still not sounding quite right.

And this book, mostly because Tracy Clark is such a gorgeously inspirational photographer and writer, and also because I have a teeny little thing in it.

We've been watching Arrested Development with Ben every night, late, and while I'm not exactly recommending it, boy, are we laughing a lot. Come on!

Ben, who starts middle school next week. I will be catatonically depressed about the end of the summer. Please stand by. Dear friends, do. Stand by me. 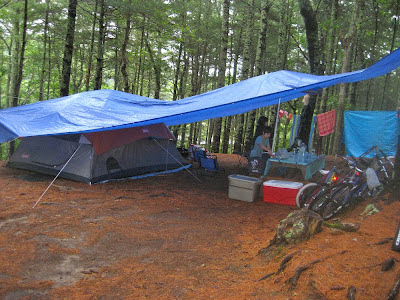 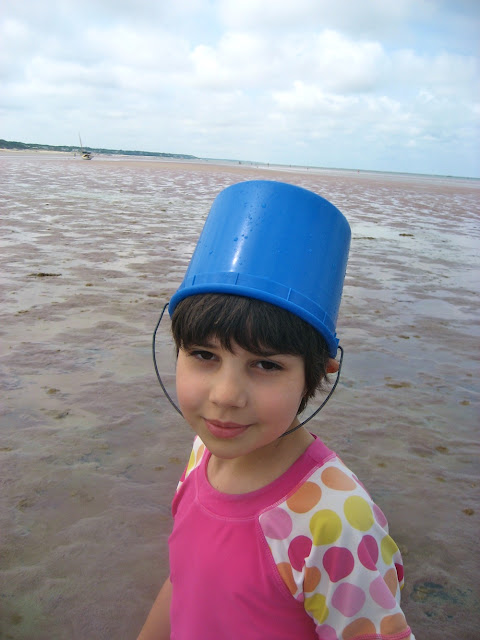 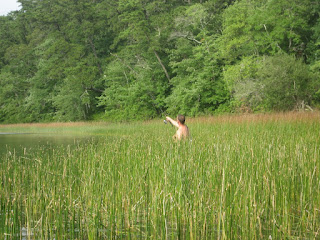 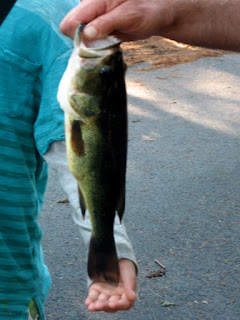 Now spread the granola evenly on two very large rimmed baking sheets (I think mine are called “jelly roll pans,” and they’re 12 inches by 17 inches) and bake for 15 minutes. Now take the pans out of the oven and use a spatula to stir the granola around—the edges may have started to brown a bit, and the idea is to move it often enough that all of it browns without any of it burning; be especially wary of the wheat germ, which likes to hide out at the bottom of the pan where it can char in peace. Put the pans back in the oven (switching their positions), and bake another 10 minutes, then stir them around and return them to the oven. After another 10 minutes (35 minutes altogether), evaluate the granola for doneness: it should be fairly golden and toasted-looking; if it’s not, return it to the oven for a few minutes at a time, stirring at each checking until it’s done; bear in mind that it will continue to toast a bit in the hot pans after you remove them from the oven. Allow the finished granola to cool completely before storing in a large, lidded, airtight container or, if you're camping, in a gallon-sized ziploc.
Posted by BenBirdy1 at 8/17/2012 10:04:00 AM 17 comments:

I make tons and tons of ice cream and frozen yogurt all summer long. Sometimes. It’s like doing yoga or making mozzarella or taking fish oil capsules: a passion that I get all evangelical about—until I forget about it for months or years on end, and you’re like, “Do you want to go to that hot yoga class you totally forced me to become addicted to and now I’m obsessed and broke and exhausted all the time?” And I’m like, “What? Nah.” But this has been a big ice-cream summer for us, and we've loved it.

I’ll make a custard base for vanilla or chocolate ice cream. But for fruit, I pretty much always use a version of the same, super-easy recipe: "Any Berry Ice Cream" from the late, great Barbara Tropp’s scrumptastic China Moon cookbook (longtime readers: this is the cookbook whence comes the famous, mandatory green vinaigrette). I love it because it’s perfect, it’s fast, it’s not obscenely rich, and it’s a lovely, light showcase for gorgeous, fragrant summer fruit. Plus, you don’t have to cook anything, and once you get the gist of the formula, you really can use pretty much any fruit. Okay, maybe not really any fruit. But any berry or stone fruit will work--peaches, apricots, nectarines, plums, cherries, raspberries, strawberries, etc.--or, even, flavorful melon or very ripe pears. Or you can also use citrus juice and some grated zest, boosted with extra sugar, to make incredible sherbet. Earlier in the summer, I made tons of strawberry ice cream and cherry ice cream. For the cherry, I whapped some of the pits with a hammer (like this) then included the kernels for their divine almondy flavor. Yum. I am planning to make raspberry ice cream later in the week.

If you don’t have an ice cream maker, and you have room in your freezer, at least during the summer, to store the inner container (it needs to be frozen before you use it), then this is the ice cream maker I recommend. Otherwise, I'll bet that Googling "how to make ice cream without an ice cream maker" would get you some pretty helpful ideas. It goes without saying: homemade is a much, much cheaper way than buying it to end up with a quart of fabulous ice cream. 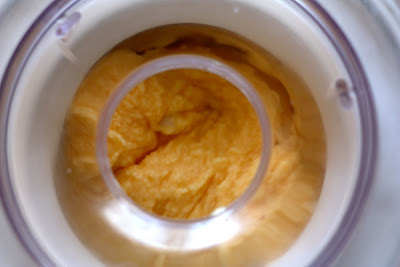 Adapted from China Moon. This is a very flexible recipe: you want a shy 4 cups total mixture, but you can vary the amounts of fruit and dairy. You can use all yogurt, for excellent frozen yogurt (use whole-milk or 2%, since lower fat starts to get a bit thin and depressing), all half and half, for excellent light ice cream, or a combination. Or, for a more sherbety situation, you can use more fruit overall and less dairy. Barbara Tropp recommended sieving the fruit mixture to get rid of the seeds. Guess whether or not I do.

Enough very ripe berries or stone fruit to make a shy 2 cups pureed (about ¾ pound berries, weighed after trimming, or around 5 peaches, or around 1 pound of melon flesh, etc.)
½-1 cup sugar (to taste)
1 or 2 teaspoons fresh-squeezed lemon or lime juice
1 or 2 optional tablespoons of a complementary liqueur (Amaretto goes beautifully with peaches)
2 cups half and half or plain (whole-milk or 2%) Greek yogurt or a combination

Pit, hull, or seed your fruit, skin it if necessary, and cut it into pieces, as needed, to smash and measure it. If your peach skins are thin and not to fuzzy, you can simply scrub them and not worry too much. But if they seem like they're going to make a nuisance of themselves, then you can halve the peaches, and use a juicer to ream the flesh from the skins. This is untraditional but effective. If you're measuring soft berries, such as strawberries, smash them down in the measuring cup with a potato masher to get a better read of the amount. Melon can simple be cut from its rind and chunked.

In a blender or food processor, whir together the fruit and sugar until smooth. Add the lemon or lime juice, optional liqueur, and yogurt or half and half and whir again. Now taste. The flavor should be rounded and just a bit too sweet so that it will taste perfect when it’s frozen. Add more lemon juice and/or sugar, whir, and taste again.

Ideally, chill the mixture, covered, for an hour or longer before freezing. But I usually don’t leave myself time for this. Freeze according to the directions of your ice-cream maker. If you can’t get it firm enough, scoop into a glass container, cover, and freeze until firm.