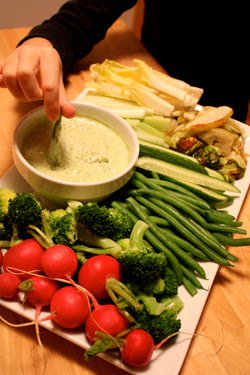 This is my gift to you this Thanksgiving—the gift of your not cramming your pie hole with baked brie and grape-jelly meatballs right before you sit down eat the biggest meal of the year complete with a bucket of gravy, a basket of Aunt Willetta’s dinner rolls, and so many variations on the theme of glucose-in-a-crust that you have a sudden epiphany about pi, and how it goes on and on, forever and ever, or at least until you fall asleep on the couch with a small plate still balanced on your knees. As our friend Megan used to say after the turkey and stuffing every year, “I’m doing a juice fast until the pies come out.” 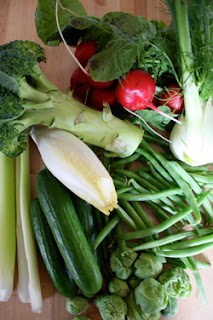 So, here’s this: a way to start the meal on a lovely, light note; a way to be sure that you won’t be stuffed before you even begin; a way to give your kids lots of pleasant little jobs while they’re milling around; a way to get a few veggies into your kids nice and early, while they’re hungrily milling around; and a way to forget about serving salad with dinner because you’re going to forget about serving it anyways. I can’t tell you how many Thanksgivings we wobbled late to the fridge to look for another bottle of wine—only to see in there the poor, forgotten salad still covered in a damp dish towel. Nobody wants salad after pie. Not even Michael’s brother Keith, who is famous in our house for once hiding an entire quart of gravy during the meal so there would be plenty for his leftovers the next morning. “I could have sworn there was more gravy,” I said, while our guests ate nude seconds of mashed potatoes, and Keith shrugged and said cheerfully, “Oh well!” 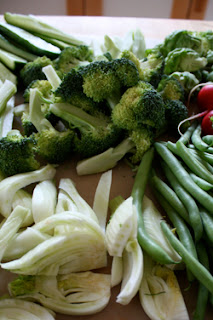 Now if you’re a friend or family member, well, you’ve already passed out with boredom because yes, you know, you have been served this exact platter of vegetables at every holiday meal you’ve ever eaten in our company, whether or not I was actually hosting it myself, and I’m sorry. This is what I make at home; it’s what I bring whenever we’ve been invited anywhere. And it’s always more or less like this. Though, that said, there have been many variations over the years, and you should feel free to experiment. Here, the dip is kind of like an Italian green sauce with mayo mixed in—a little pungent, a little spunky—but I’ve made a milder version using lemon juice, lemon zest, and dill instead of the vinegar and parsley, and I’ve added other herbs (marjoram, say, or chives) or lightened it with a bit of sour cream. It’s not mandatory that you trouble yourself with the whole high-concept shades-of-green thing I’ve got going on with the veggies here; you could do lots of one single vegetable (I’ve done all green beans), which makes this very quick and easy to put together, or you could do a fancy rainbow of veggies (radishes, cherry tomatoes, carrots, yellow peppers, broccoli), or you could do raw carrots, roasted cauliflower, boiled new potatoes, or steamed asparagus. Yum. 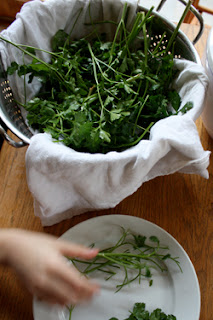 I am partial to the white backdrop of dishes here, though when I complain about the fact that the platter wobbles, Michael says, “I can’t believe that! The quality has really gone downhill, over at the town dump’s free table.” Good point. 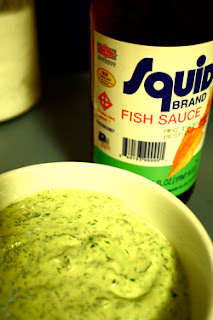 Crudités with the best-ever Green Dip
preparation time: 1 hour; all the prep can be done the day before.
Two things. One, even though the “cru” in crudités means raw, in France, where they pronounce it croo-dights (okay, they don’t, they pronounce it croo-di-tay), many dip vegetables benefit from a bit of cooking. And two, yes, there’s fish sauce in the dip, and yes you can leave it out, though then you will be missing what our friend Pengyew calls “a little something funky.” Nobody will notice it, I swear, not even the people who always have a heart attack about anchovies, even though they love Caesar salad, which has anchovies in it, I’m just saying.

Begin by preparing the vegetables (below). Now make the dip: wash the parsley in a large sink of water, spin it dry, then pull the leaves from their stems, without deranging yourself over the smaller stems, which are fine to include; this is a wonderful job for a seated child or an adult with a glass of wine. In a food processor, whir together the parsley, vinegar, olive oil, garlic, salt, capers, fish sauce, black pepper, and ¼ cup of the mayo. Stop the motor to scrape down the sides every now and then, and when it’s quite finely ground together, add the rest of the mayo and process until smooth and green. Can you do this in a blender? I’m not sure. I once—once—made pesto in a blender, and after I tried to cram the basil while the machine was still running, we ended up calling it “wooden spoon pesto,” so I’m the wrong person to ask. Taste the dip for seasoning—it should be quite tangy and salty, so add more salt or vinegar as you need to—then scrape it into a small bowl, cover, and chill until you’re ready to eat it.

Veggie Prep School:
All veggies can be prepped, then wrapped with their own kind in paper towels or clean dishtowels and stored all together in a big Ziploc in the fridge until you’re ready to arrange them on a platter.
Green beans: Snap off the stem ends, then drop them in a large pot of boiling water (steam them if you prefer), scoop them out after a few minutes, when they’re tender and bright green, and rinse them well in cold water before wrapping them up in a dishtowel to dry.
Broccoli: Cut off the big stem, peel it, and slice it into narrow sticks. Cut the rest into elegant florets. Blanch it all in the boiling bean water for 2-3 minutes until just crisp-tender and bright green, then drain, chill, and wrap as for the beans.
Fennel: Trim off the feathery top, any damaged looking outer leaves, and the very bottom, then cut the bulb into vertical slices and cut each of these in half. The core will keep them largely intact. Toss the slices with a bit of olive oil and salt, then roast these on a foil-lined baking sheet at 450 for around 10 minutes until they’re browning and tender.
Do the Brussels sprouts the same way: trim them, cut them in half, toss with oil and salt, and roast alongside the fennel, on the same sheet even (cauliflower is also good this way too).
Celery is simply cut into sticks; radishes are washed and trimmed; cukes are cut into wedges or slices; endive is separated into leaves that only I will eat.
Posted by BenBirdy1 at 11/20/2005 07:23:00 PM