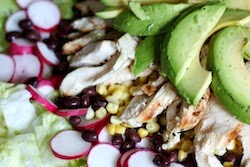 Is it hot hot hot where you are, like it is here? All anybody wants to eat is fruit and popsicles and salad. Well, also Twizzlers and potato chips and soda and cotton candy and bubblegum chewing tobacco, but you know what I mean. I am reminded suddenly of my teenagerhood: after my brother had already left us for college (sigh) my mom would, on a hot night, sometimes set up the card table in the living room and make a huge salad nicoise that we could eat by the open window. I still think I've never felt quite as grown-up since as I did then, crunching on green beans and tinned tuna in the faint breeze with my beautiful mother, like we were on a sidewalk in Paris waiting for our café au laits--rather than people who were about to retire to the air-conditioned bedroom to watch Taxi reruns.

And my kids, little though they are (Are they? I don't even know anymore.) also love a salad for dinner. It's cold and crunchy and you can help yourself and it just feels like the essence of summer. Of course, it helps if you have a great salad, and this really is one: the dressing is limey and creamy, and it's full of exciting treats: tortilla chips and grilled chicken and corn, and also, if you're Birdy or me, crunchy, delicious radishes. Of course you could change it in a million ways: you could use spinach, say, which would up the nutrients (although my kids think of iceberg lettuce as thrilling junk food, so I love to serve it to them occasionally), you could do steak or ground beef instead of chicken (or skip the meat altogether), you could swap in roasted green pumpkin seeds for the chips (another nutrient-booster), you could add some grated cheddar (I meant to and forgot) or black olives, you can swap in other kinds of beans, add chopped tomatoes, dress it with a mixture of salsa and sour cream like our friend Megan does. Although, I have to recommend the dressing: it's not hard, and part of it doubles as a marinade for the chicken, so it's kind of a two-fer situation. If I were making this for my own self, I would add a bit of chopped red onion.

And that said, I need to confess something: there was an inexplicable epidemic among the children of not eating the chicken. I can't explain it, except to say that we had friends over, one of whom opted out of the chicken, which seemed to set in motion a great and revolted pushing aside of it on everybody's plate. WTF? Limey grilled chicken? And strips of breast, not even legs or thighs with all their creepy tendons and cartilage that might force you to remember the living poultry's muscles at work, dipping and clucking around the chicken yard?  Even Birdy will usually gobble up a piece or two of grilled chicken breast. But not this time. "Chicken is just kind of starting to gross me out," Ben said. Ben who was crunching ravenously through his lettuce like a person starved for lettuce. The same Ben who, as recently as three years ago, would have plucked a nanoparticle of lettuce from his chicken sandwich and said, "Ack! There's salad in here! Somebody take it from me so I can eat my yummy yummy chicken." How they change. But then again, three years ago, I would have gotten up from the table to fetch a pair of tweezers to pluck every last molecule of raw onion from the salad you were serving me. Because it used to be my least favorite food. Only now I love it. So go figure.

Mexican Chicken Salad with Buttermilk Lime Dressing
Serves 6
Active time: 45 minutes, plus some time for the chicken to marinate

Juice of 2 limes (around 1/3 cup) plus the finely grated zest of one of them
2 teaspoons koshers salt, divided use (or half as much table salt)
2 cloves garlic, pressed or finely minced
2 tablespoons chopped cilantro
2 tablespoons olive oil
3 boneless skinless chicken breasts
1/2 cup mayonnaise
1/4 cup buttermilk
1 teaspoon sugar
1 head of iceberg or romaine lettuce, chopped
The kernels  cut from 3 ears of corn (or 1 1/2 cups frozen corn kernels)
1 can of black beans, drained and rinsed
1 large bunch of radishes, sliced
1 avocado, sliced
1/2 a bag of tortilla chips, crushed

Begin by making the dressing and marinade: whisk together the lime juice and zest, 1 teaspoon of the salt, the garlic, and the cilantro. Pour half of this lime mixture into a dish large enough to hold the chicken, then whisk in the olive oil and the other teaspoon of salt; add the chicken, turn to coat it with the marinade, cover it, and refrigerate it for up to 4 hours and for as little as 20 minutes. Now take the remaining half of the lime mixture and whisk in the mayo, buttermilk, and sugar. Taste it--add salt, sugar, or lime as needed--then cover and refrigerate. This is the dressing.

Prepare the corn: bring a tablespoon or so of water to a simmer in a small pan over medium-high heat, then add the fresh or frozen corn and cook, stirring occasionally, until just tender, around 2 or 3 minutes.

When you're ready to eat, heat a gas grill or barbeque and cook the chicken until it is just cooked through, turning it occasionally, around 10 minutes altogether. Set it aside to cool on a cutting board while you assemble the salad.

Spread the lettuce on a very large plate, then add rings of radishes, beans, corn, and avocado. Slice the chicken and arrange it on the top of the salad, then bring it to the table so everyone can see how pretty it is. Add the dressing and chips, then toss and serve.
Posted by BenBirdy1 at 9/23/2005 05:52:00 PM