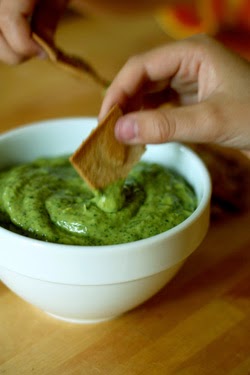 It's funny that "dippy" is a disparaging adjective. What on earth is the connection between French onion and scatterbrainedness? Just because I would stick a chip into anything soft enough to scoop up, whether or not it was actually food, doesn't make me a ditz, does it? I love dips and dipping, and in almost every photograph of myself I've ever seen, I am applying some kind of condiment to some kind of snack food, even if it's simply squeezing a stripe of yellow mustard along the length of a pretzel rod or blooping a little puddle of Frank's Red Hot onto a tortilla chip. But oh, true dipping--that's the best--whether it's artichoke leaves into melted butter or buttered baguette toasts into artichoke dip. Last New Year's eve, I actually spent the entire duration of a party in a kitchen chair that I'd pulled up to the buffet, where the artichoke dip was located. Which, as I recall, actually resulted in the ingesting of too much artichoke dip, with too much champagne to wash it down. But that's what parties are like for me. Sometimes I don't even pretend to socialize--I just hunch over the chips and crackers, shoveling dip into my mouth and spraying crumbs everywhere when I cry out, every minute or two, "This is so freaking good!" even if I'm the one who brought it.

And I am usually the one who brought it.

But let me just make a case for dip, parenting-wise, since that's why we're all here, right? Dipping can be a great way to introduce your kids to a food they are suspicious of. Partly it's because everything tastes good on a chip (If I ever start a food company, it could be called Because Everything Tastes Good on a Chip, and it could just be jars of mouse droppings and old tempera paint and dirt). And partly it's because dips are usually seductively salty and tangy and flavorful. And partly I think it's the control factor: kids will try something on a chip because they get to determine the rate and amount of consumption; they can scoop up a nano-particle or a shovelful; they have more agency than they do when you, say, heap their plates with seedy, steaming slabs of summer squash, which makes them feel all cornered and panicky.

Plus, I am a fan of eating dip for dinner. Or packing it up for school lunch. Because that's how it is around here. And I don't mean that bacon-horseradish dip and Ruffles makes a perfectly fine meal, although, yum. But hummus and bean dips and veggie dips--why not? And this here gorgeous pair of dips, which are the perfect outlet for expressing yourself, if what you want to express is the fact that you have too many zucchini or beets on your hands. The zuke dip is, like its eggplanty cousin baba ganoush, addictively garlicky, minty, and lemony, with a smoky vegetal undercurrent from the zucchini that is not actually dominant. (Wow, am I hard-selling this one, or what? But it is seriously good.)

I know the baseball bats are the zucchini you're most desperate to use up, but try not to for this, since the flesh of the behemoths tends to be excessively seedy and watery. In a pinch (I do this), you could quarter a huge one lengthwise and slice out the super-seedy interior before proceeding with the recipe. That works just fine.

1 1/2 pounds small or medium zucchini, scrubbed, trimmed, quartered lengthwise (or halved if they're small) and cut into 1-inch chunks
1 tablespoon plus 1/4 cup olive oil
1 teaspoon plus 1/2 teaspoon kosher salt (or half as much table salt)
1 clove garlic, smashed and peeled
Juice of one lime, plus half of its finely grated zest
A large handful of cilantro, washed and dried
2 teaspoons sugar
1/3 cup Greek yogurt

Heat the oven to 450. Toss the zuke cubes with 1 tablespoon of olive oil and 1 teaspoon of salt, then spread them in one layer on a large, rimmed baking sheet and roast for around 30 minutes, until they are browned in spots and very soft, but not burnt (duh, but I thought I'd say it). Let them cool slightly so they don't cook the cilantro when you blend them.

In a food processor fitted with the metal blade, whir together the zukes and the garlic, then add the remaining 1/2 teaspoon salt, the lime juice and zest, the cilantro, and the sugar, and blend, stopping the machine to scrape down the sides of the bowl as needed, until it forms a coarse puree. With the motor running, slowly drizzle in the remaining 1/4 cup of olive oil, then whir in the yogurt and taste the mixture, adding more salt or lime juice as needed for maximum zing. Serve with crackers or chips.

This beet dip is stunningly beautiful and so rich and tangy and wonderful that I will eat and eat it until it is gone. Maybe this encourages the children somehow, my gorging: it becomes so obvious that I'm going to finish this or that dip that they rush in to get their fair share in a kind of chip-wielding survival-of-the-fittest scenario.
Posted by BenBirdy1 at 9/24/2005 04:05:00 PM