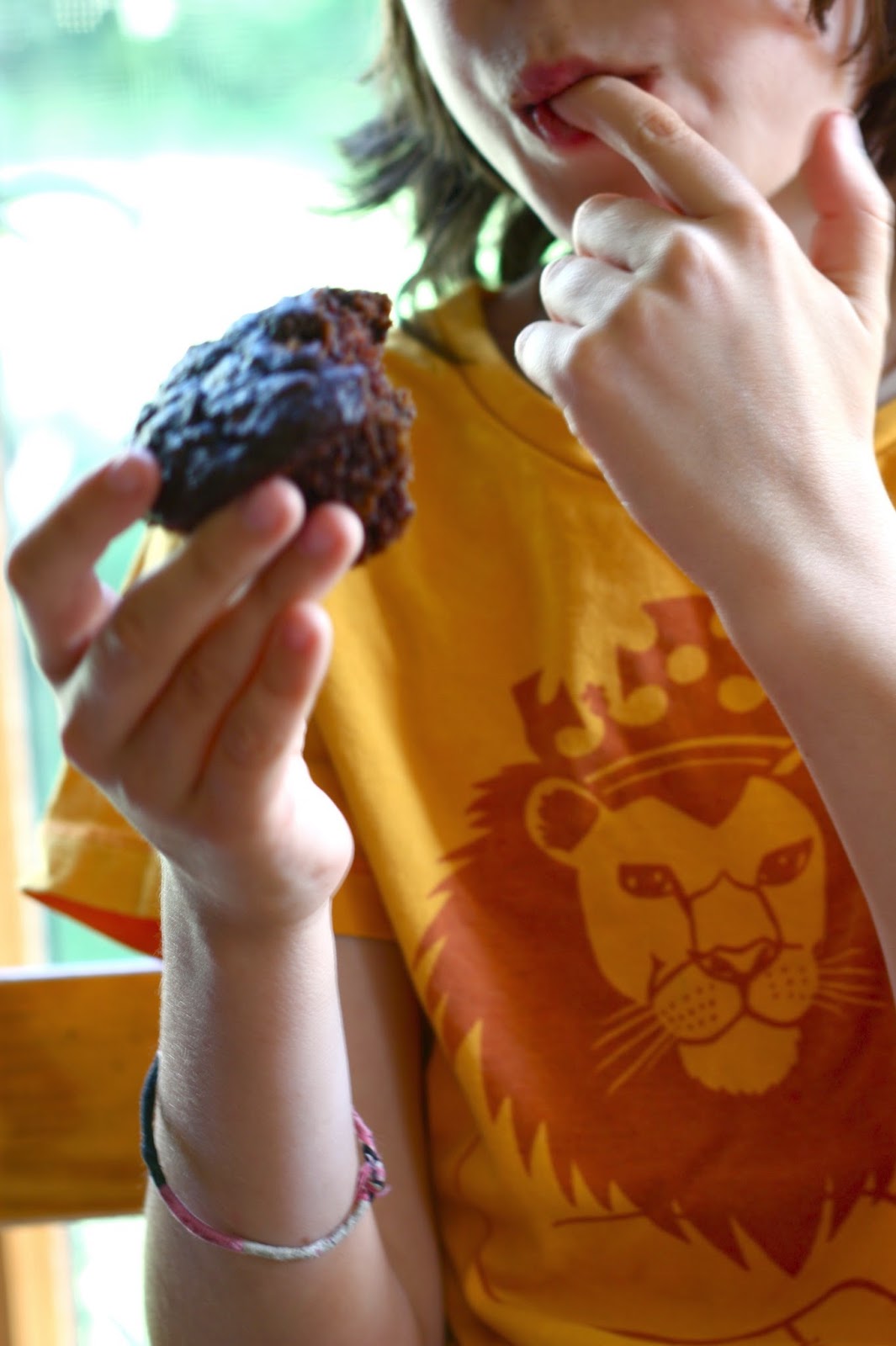 The first time my mother baked a zucchini bread--this was way back in the Pleistocene era of striped bell bottoms, smocked tunics, and Andy Gibb's "Love Is Thicker Than Water"--we all thought it was wildly exotic. It was even crazier than banana bread, which was already pretty crazy. "I can hardly even taste the zucchini!" we said, and shook our heads in amazement. "It just tastes like cake! Like good cake!"

I feel that way about these cupcakes. They taste just like chocolate cupcakes! Like good chocolate cupcakes! They're super-chocolatey and almost obscenely moist--like the cake mix with the pudding in it, in a good way. It's a great way to use up a glut of squash--and the green flecked against the rich, reddish brown of the cake frankly delights me. "We're not trying to get away with anything here," they seem to be saying, these flecks, and I agree. 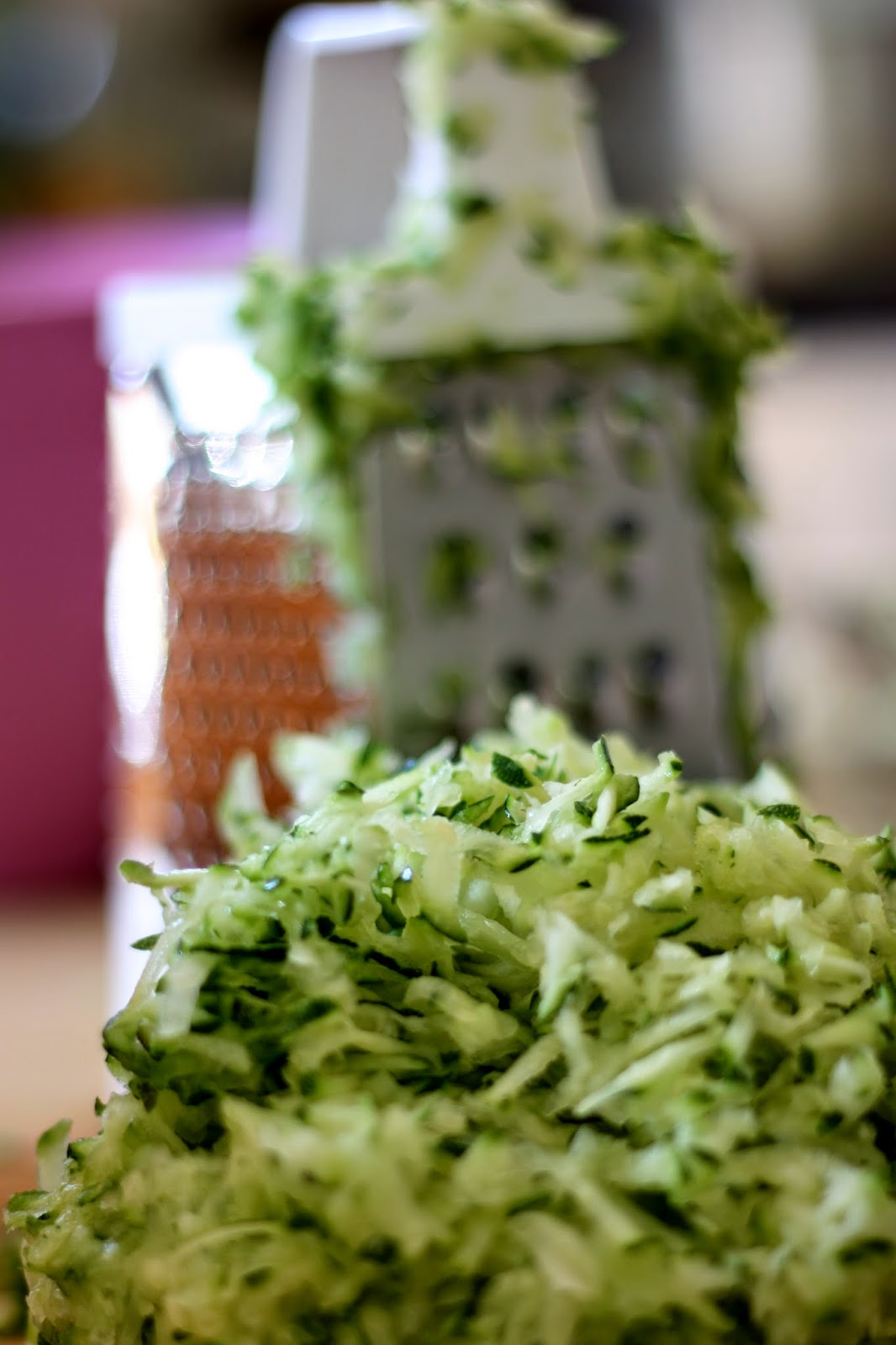 Sometimes I wonder if we don't give kids enough credit for their own desire to be healthy eaters, you know what I mean? Ben always leafs through the family magazines that arrive in the mail, and he hates nothing more than the ads promising, "Your kids will like it because they won't know it's actually good for them--they'll just think it's a deep-fried cotton candy sno-cone!" Believe me, my children would be first in line for a deep-fried cotton candy sno-cone. They love candy and junk food: they love to eat it and talk about it and save it forever, and they will likely end up on that reality show "Hoarders" with their stashes of ancient, carefully curated trick-or-treat relics. But they're also proud and happy about eating healthy foods when healthy foods are what they're eating: Birdy's a little bit in love with herself, when she stands in front of the cherry tomato vines, cramming handfuls of Sungolds into her happy mouth; Ben is excited to be a person who might order a salad in a café. Can't these little ones, glucose-addled as they may be, appreciate good nutrition without demeaning their great and powerful attachment to sugar and grease? I think so.

But then again, I am not inclined to puree a tablespoon of butternut squash into their every glass of chocolate milk or hide white beans in their hamburgers like some kind of demented, nutritious Easter egg hunt. Vegetables tend to be somewhat undisguised around here--not always, but usually. Of course, if they would not deign to put a frank apricot or spinach leaf into their toothless scurvy-ridden mouths, I might feel different about this--and you are probably thinking that right now, if you're spooning zucchini sno-cones into your own children's toothless, scurvy-ridden mouths. We all do what we have to. I'm just saying, maybe your kids will actually be glad to know there's zucchini in their festive, chocolatey back-to-school cupcakes. Or maybe they won't.

Because, truth be told, when I was asking the kids about the cupcakes, Ben ranted and raved about their supreme deliciousness, but Birdy hesitated before announcing that she actually thought they needed a bit of frosting. "Especially because of the zucchini," she added. "What do you mean, 'because of the zucchini'?" "I don't know," she sighed. "I could see it, and I just didn't really like knowing it was in there. I think frosting would have distracted me." Well! But later, when we were devouring the cake with friends, I teased her for having a second piece, and she shrugged, this contradiction with her chocolate-ringed mouth, and said, "It's actually really good. I actually really love it." So there you go.

I developed this recipe by crossing a Heidi Swanson cupcake recipe and a Bon Appetit one for cake. Feel free to omit the spices, although I love the flavor combination--just don't cut back on the vanilla or the salt, which the cake really needs in its successful fight against blandness.

Heat the oven to 350, and line 2 12-cup muffin tins with paper liners. Or line only one muffin tin, and grease and flour an 8-inch cake pan.

In one bowl, mix together the sugar, butter and oil. Beat in the eggs, one at a time, and beat well after each. Stir in the vanilla, buttermilk, zucchini, and chocolate chips.
In another bowl, whisk together all of the dry ingredients, except the walnuts. Pour the wets into the dries, and mix well until combined, adding the walnuts at some point, around halfway through the mixing. You don't want to over-mix the batter, but you don't want to leave hidden pockets of flour either.

Now scoop the batter into the cupcake liners, filling each one about 3/4 of the way, then scrape the rest of it into the prepared cake pan, if you're making a cake too. Pop the pans in the center of the oven and set a timer for 25 minutes. When it rings, check the cupcakes: your want them just set, with no jiggliness on top, true, but also without an excess of bakedness--they'll continue to bake a bit as they cool, and you really want these moist; a toothpick should come out with some damp crumbs clinging to it. If they need another minute or two, give it to them. Check the cake at 30 minutes--mine took 33 minutes for perfect, moist doneness.