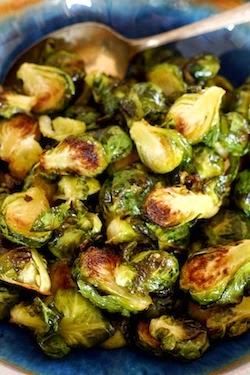 Now that so many people cook well, I feel like my kids are actually being deprived of some of life's classic food horrors. Like spinach, which though know more as a tangy salad spiked with crunchy walnuts and tart dried cranberries than as a creamed plate of mess (not that I don't love creamed spinach, by the way, but I know you're not supposed to). Or Brussels sprouts, which people still pretend is commonly dreaded ("Even if you hate Brussels sprouts, you'll love these…") but which, in fact, most children like because they usually get to eat them all crispy-caramelized, instead of boiled into sulfurous mush balls.

So, for instance, on Friday night, we went to our favorite restaurant, where we play dice games and order little stuff off the bar menu. Such as the deep-fried Brussels sprouts, which are so good that the kids are a greasy-handed blur until the giant, heaping plate is empty. They're not battered or anything, just fried until they're all mahogany sweetness and tender-hearted, shaggy-edged crunch. Oh, they are so good.

Bu they're not actually that different from the roasted kind we make at home--which is good, because I'm just not about to bring two quarts of oil to a rolling boil to make Brussels sprouts, if you know what I'm saying (and what I'm saying is: donuts, maybe, or even onion rings, but not Brussels sprouts). If you were to skip the maple syrup and fish sauce, and simply pull the pan of sprouts out of the oven after 25 minutes, you'd have a perfect side dish: the very side dish I've been making for years. However this year, since I blurred two recipes in my mind, I got it into my head to add the maple syrup and the fish sauce. A little sweet, a tiny little but funky: perfection.

Also, I think we should all agree not to go on and on in front of our kids about how Thanksgiving is our favorite holiday on account of how it's just food and togetherness and none of that pesky gift-giving; I watch their stricken faces, and I can see that it just makes them feel so lonely and greedy in their excitement about presents. "What's you favorite holiday, Mama?" they ask, and I say, "Christmas, because it's yours." And I mean it. But if it weren't for them, well. I am a sucker for the food and the togetherness. And the thanks, of course, which I am giving now and always.

These are sweet, salty, crispy, tender, and perfect. Of course, you can skip the fish sauce and maple syrup (but don't add one without the other or they will be excessively funky or cloyingly sweet), and simply pull the pan of perfect sprouts out of the oven after 25 minutes. This recipe is easily doubled or tripled; you will need another baking sheet for each batch, and you might want to rotate your pans through the oven halfway through so that they roast evenly.

Heat the oven to 425 and line a rimmed cookie sheet with foil or parchment paper. In a large bowl, toss the sprouts with the oil and salt (this is a good job for a child who's not afraid of oily fingers) and arrange them, cut-side down, on the baking sheet.

Bake near the top of the oven for 25 minutes, then return them to their bowl, stir in the maple syrup and fish sauce, and spread them willy-nilly back in the pan. Roast for five more minutes, add which point they should be deeply browned and tender. Serve hot or at room temperature.
Posted by BenBirdy1 at 9/24/2005 05:05:00 PM