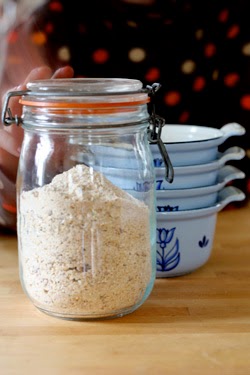 If I could brush my teeth with oats, believe me, I would. In fact, I was going to write, "I'd take a bath in them," and then I remembered that I actually have: once when I was covered in a welty poison oak situation, I put oats in the bath, and it was lovely: slippery and soothing in a very porridgy kind of way. Or maybe I'm confusing it with the time the Partridge family got sprayed by skunks and had to bathe in tomato juice? I'm not sure. 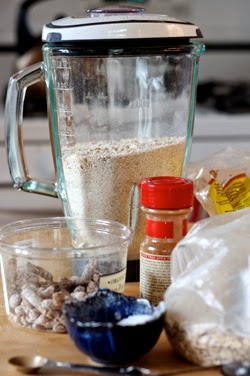 Anyway, I know this is not the first oat-based breakfast recipe I've offered you--what with the muesli, and the granola, and the granola bars. But November means hot-cereal season. Well, for the kids and me at least. Not for Michael, who gags at the mere sight of hot cereal. Being the way I am, I like to shovel into his psyche to dig up the roots of this aversion. Was he spanked once with his mouthful of Cream of Wheat? Did he see his grandma naked in the middle of his farina? (That didn't come out right. Not that his nude grandma was actually in his farina, but that she was naked while he was eating it. Which she wasn't.) What? But no. No reason, he says, beyond its "categorical grossness." I see.

He's not alone, I know. When I taught writing classes at UC, Santa Cruz, I the first free-write I used to do with my students was "oatmeal": pen to paper, 15 minutes, whatever the prompt prompts. The students read aloud their ecstatic or revolted memories about comforting blandness or terrorizing glop; oatmeal was school mornings or Christmas morning, pot-stirring mothers in pink aprons or packets torn open alone; someone wrote about Goldilocks; a Latina student wrote of her absolute absence of a relationship to oatmeal; a Chinese-American student wrote about congee. I loved their stories. 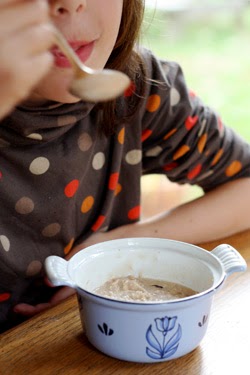 And I love oatmeal. I love steel-cut oats cooked overnight in a crock pot; I love my mother's English porridge with cream; I even love those Quaker instant packets that send up an oaty little cloud of dust when you open them. But for me, having this homemade instant oatmeal in a jar is another of my money-in-the-bank food situations: come a chilly morning, the kids can decide to have oatmeal without me standing at the stove or scrubbing a sludge-slicked pot. It's because you grind the oats up fine, which is all instant oatmeal really is, so that they cook on contact with boiling water. And this instant oatmeal is precisely as wholesome as whatever we put in it. Which is mostly oats. But also dates. And brown sugar, because you know me: I'm much more concerned about what a meal does offer nutritionally than what it doesn't. For the sake of all that fibery whole-grain wholesomeness, I'm happy enough for my kids to eat a bit of sugar.

You can customize this however you like, of course! Skip the dates and cinnamon and leave it plain--or add in other favorite treats such as walnuts or dried apples (or flax meal--yum!). And you can, of course, omit the sugar and serve it as is or with a bloop of maple syrup or fruit jam. But if you leave out the salt, you will be punished with blandness.

In a blender, whir 1 cup of oats with the remaining ingredients until powdered. Now add the rest of the oats and pulse until the oats are mostly broken down. You may need to stop and shake up the blender jar if the oat powder at the bottom is gumming up the works.

To make the oatmeal, pour 3/4 cup boiling water over 1/2 cup of the oatmeal mixture, stir, and let stand for a minute (I usually add a few dried cherries before I pour the water over). Add a few spoonfuls of milk or cream and serve.