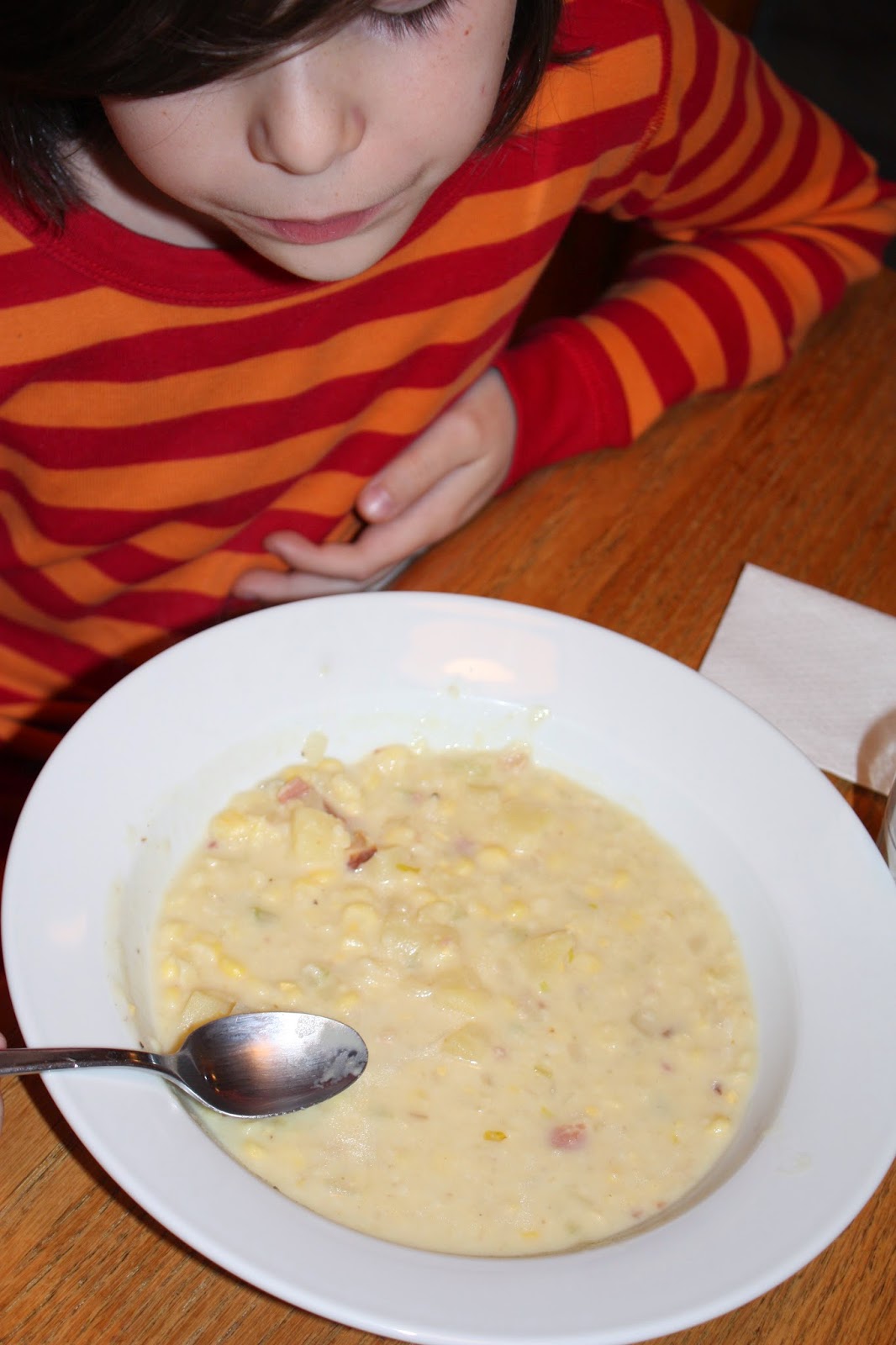 As far as children are concerned, corn is less a vegetable than a kind of honorary pasta: its only real flavor is a kind of bland, Frito-y sweetness, and it also benefits from summery associations with picnic tables, long, late twilights, and dripping butter. Which is why, on a winter Sunday evening like this, when it’s cold and dark and Birdy has one of those cases of pink-eye that wakes her with a crusted-over blindness and a dread of the drops, well—it’s time for a little corn.

Okay, I didn’t actually think about it that hard. It was more that I opened the freezer, and there was corn. Despite our moderate commitment to eating seasonally and locally, I make an exception for frozen corn and also frozen peas, both of which are just so reliably good, I find. Plus, I almost never shop for meals: I am the kind of person who can usually be found, come 5:00, scrounging through the lentils and rice and pasta and canned beans and tomatoes and root vegetables and various bags of frozen things. The children are unerringly polite. “Wow,” they say. “Orzo with butternut squash and pesto. I would never have thought of that.” Okay, that’s Ben. Birdy just gobbles the pasta while discretely pushing squash cubes off to the side into a miniature compost pile.

But corn chowder? That’s a sure winner: creamy, smoky, sweet, and as innocent as the children themselves. “Wow, this is the best soup you’ve ever made!” Ben said—which is, I think, the same thing he said last time I made it. (Lurking in that utterance is a kind of unexpressed relief about the absence of kale and turnips, but the less said about that the better.) This is the quintessential one-pot meal, and I was able to finish it even while I comforted Birdy, who lay on the kitchen couch, squeezing tears out of her poor rabbity prizefighter eyes. And I served it with a loaf of fresh bread and with the memory of the many wholesome, delicious salads we’ve eaten in the past.

Corn Chowder
Do you feel like I’m shilling for the pork council? I know. I feel the same way. But this soup can be deliciously meatless—just sauté the onions in a knob of butter and proceed with the recipe. Back in our vegetarian days, I actually used to add smokiness with Bacos which are actually, disturbingly, meatless—but given that they seem to be made from food coloring that’s been compressed with MSG and artificial flavoring, that was a real letter-of-the-law kind of solution, and I don’t recommend it. You could try grating a little smoked cheddar on it instead.

5 or 6 slices of bacon, sliced into small pieces
1 onion chopped fine
2 stalks of celery, diced, with some of the finely-chopped leaves
4 cups peeled, diced potatoes (I use 4 fist-sized Yukon Golds, but 2 big russets would give you a similar yield)
1 quart (1 box) chicken broth
1/2 teaspoon kosher salt
1 crumble of dried thyme (aka a “pinch”)
4 cups corn kernels (or a 1-pound bag frozen, which is 3 1/3 cups)
1 cup half and half
Salt and pepper

In a soup pot (I actually used a medium-sized pot, and the soup just barely fit), begin cooking the bacon over medium-low heat, stirring occasionally, until it starts to give up a lot of its fat. Now add the onion and celery and cook, stirring frequently, until the onion is translucent and browning and the bacon looks quite cooked, about 10 minutes or so (alternately, you can forget all about the celery my mistake, and then cook it later in a separate pan with a bit of butter before stirring it into the soup, because who doesn’t have time to kill while making dinner?).

Add the potatoes and the canned broth to the pot, along with the crumble of thyme and the salt, then raise the heat to high and bring it to a boil before turning the heat way down and covering the pot to simmer gently until the potatoes are done. (Did you get all that?) This will take about 15 minutes.

Now add the corn (you don’t need to thaw it first) and half and half, turn the heat up to boil it and then down again to simmer it (like you just did), and cook the soup for about 5 minutes longer, until the corn is tender. At this point I like to puree about half the soup, and I do this with a stick blender—you could do it in a real blender (be very careful though, okay?), or you could even just use a wooden spoon to mash some of the potatoes against the side of the pot. Now taste for salt: it will likely need more, which you should add with a grind or two of pepper before serving.
Posted by BenBirdy1 at 9/24/2005 12:09:00 PM