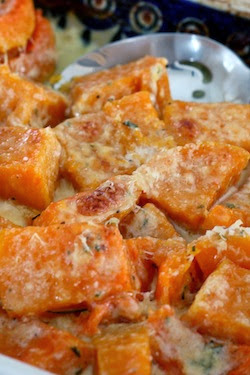 I want you to know that I only run a recipe here if it's excellent enough to actually buy the ingredients for. And I'm mentioning that because I'm self-conscious about our winter farm share. We have a basement full of the guilty evidence of our crime--the crime of not using enough root vegetables--with grubby parsnips and rutabagas stashed everywhere like dead bodies. But just because I have 50 pounds of turnips to use by Tuesday doesn't mean that you need to be making turnip stew this week. I understand that, I do. Nor do you need to be making Special Mixed Root Vegetable Soup or Special Mixed Root Vegetable Puree. You may, actually, need to make Special Roasted Mixed Root Vegetables, so stay tuned, but I really do try to spare you the worst of it.

The squash, though, is a different thing. It's true that I am cramming them everywhere--"Mama, what's this orange thing in my tamale pie?"--but it's also true that I can still get excited about a fantastic squash recipe, one that shows off their sweetness and substance. A designation recipe. And this is just that kind of recipe: it's creamy and cheesy, simple and rich, like the mac and cheese of the squash world. While it's baking, your house will fill with the aroma of rosemary and toasting parmesan--a smell that is somehow enticingly green and brown, despite the obvious orangeness of the actual dish--and then the squash will taste exactly the way you thought it was going to, and a chorus of tiny angels will fly in a halo around your head, singing about Vitamin A and what a great cook you are and good for you to use the squash before it rotted.

It's also such an easy dish that it's kind of ridiculous: you spend about 1 second assembling it (after you've wrestled the squash into cubes), and then it just manages itself in the oven with spectacular results. I made it for a potluck, and everybody loved it. I forgot about it in the oven for an hour, and all the cream cooked completely away and the squash melted and the top got deeply browned, and everybody loved it. We joked about how, with Anni gone (her sister's having her own baby!), we would never finish it. And then we finished it. I served the gratin with a simple, sharply dressed spinach salad and bacon that we'd just gotten from our pig-farming friends, and it was such an exquisite, balanced, honest meal that we sat at the table afterwards patting our bellies and sighing. You'll see

If you're squash is a little bigger or smaller, don't fret--just adjust the cream and salt accordingly.

Heat the oven to 400 and grease a casserole dish.

Arrange the squash in the casserole. Combine the cream, salt, rosemary, and black pepper, whisk it with a fork, then pour it over the squash. Toss the squash a bit to coat each piece with the cream mixture (I use my hands for this), then cover tightly with foil and bake in the middle of the oven for half an hour.

Uncover the squash, gently stir in half the cheese (I use a rubber spatula for this), sprinkle on the remaining cheese, and bake, uncovered, another 15 minutes or so, until the top is browned and the squash is tender when you pierce it with a knife. Allow the casserole to stand for 5 minutes before serving so that the cream can thicken up.
Posted by BenBirdy1 at 11/20/2005 07:06:00 PM