Pork So Good It Could Make You Cry 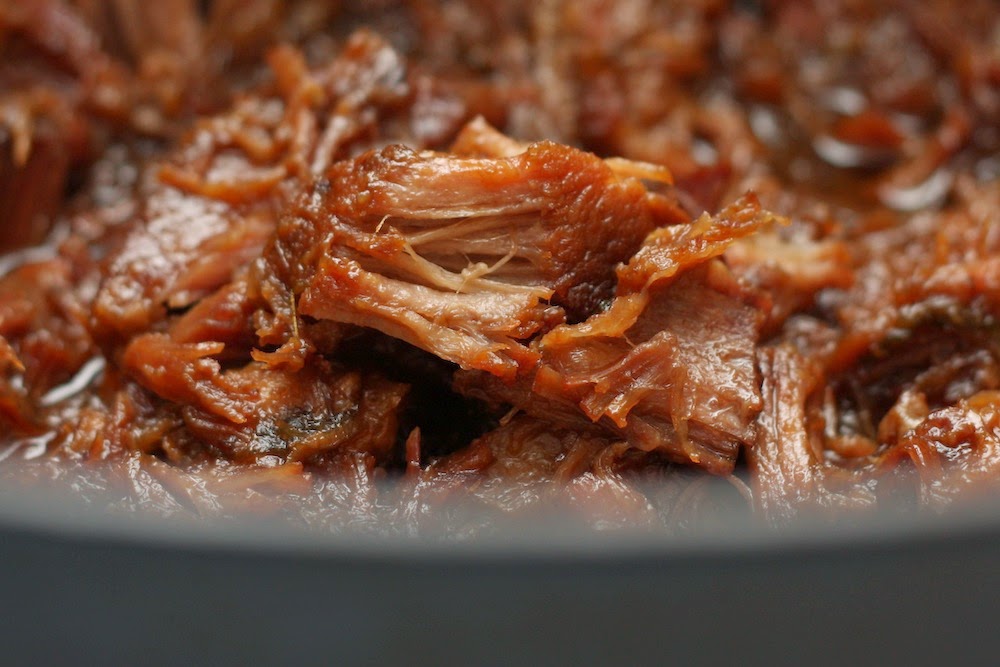 My friend Jonathan just lovingly accused me of being a porkophile, and he's right--though it's a bit of the pot calling the kettle a pot, or whatever, given that this man just raised and butchered five enormous pigs. Be that as it may, pork has situated itself in some of the most wildly memorable eating experiences of my life: at this Chinese-Cuban place in New York City, for instance, where the not-overly-inspiringly-named "Fried Pork Chunks" turn out to be crispy, golden, melting cubes of pork fat--like bacon, but with only the vaguest striations of actual meat. Wow. Or Tacos Vallarta in Santa Cruz, where a carnitas taco arrives as a pair of corn tortillas mounded with so celestial a mix of succulently tender shreds and richly crunchy hunks that angels sing the Hallelujah Chorus above your head while you eat, drowning out the reality show that is likely playing loud on TV ("Ay Caramba!" Michael still likes to say, in perfect imitation of the perky voice-over on a clip of a man getting gored to death by a bull). Or this crazy no-name barbeque place that my brother took us to in Atlanta, where the vinegary ribs had been cooked so long and so well that the meat pulled off the bones in chewy, dryish sheets of excellence that were like a cross between barbeque and the jerky that Willy Wonka would make, if Willy Wonka ever dabbled in pork. 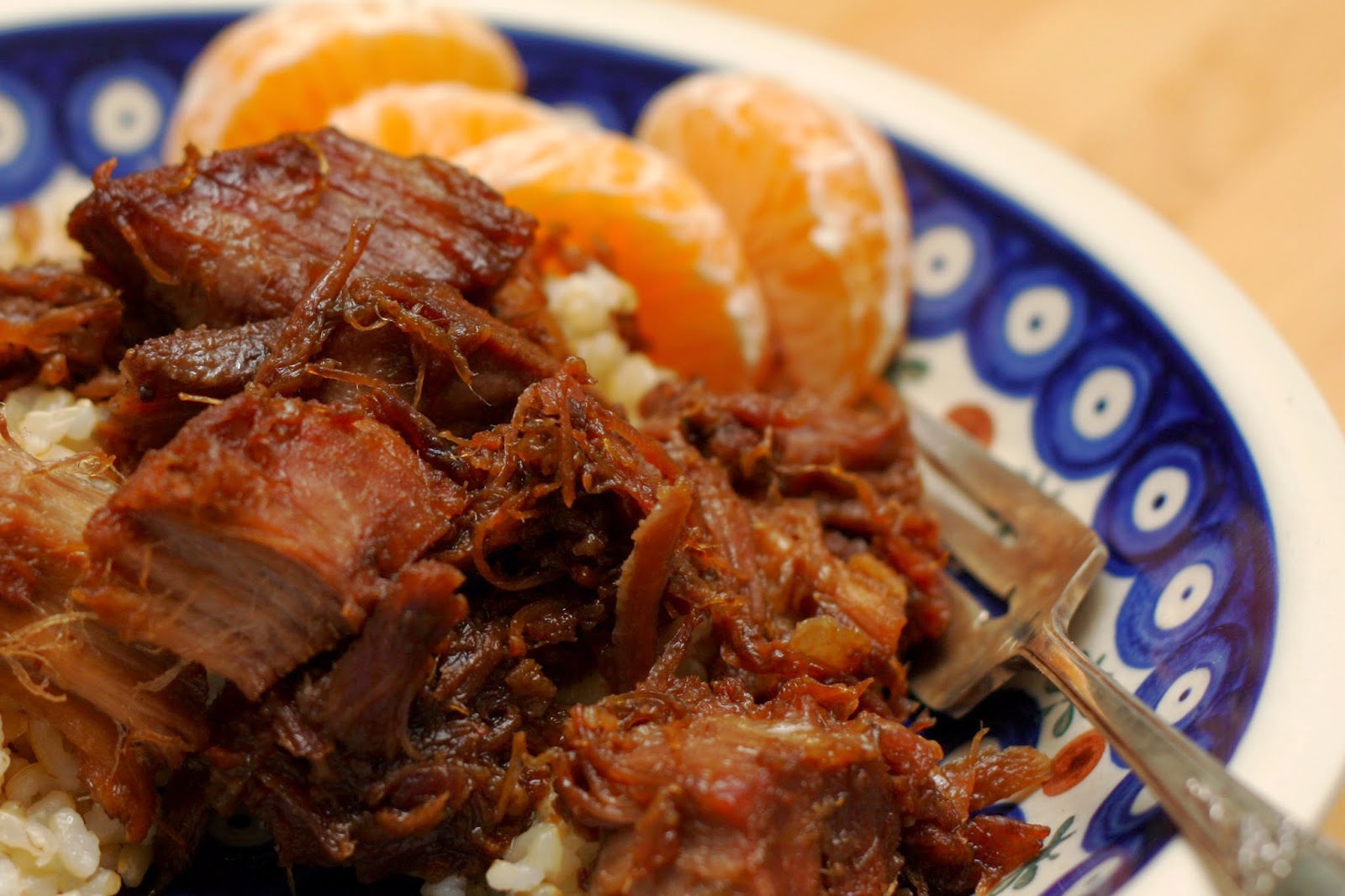 If you are still reading, that means that you are addicted to porkographic websites, and should seek help. But it also means that this recipe might be up your alley (Is it just me, wondering about that expression? "I've got something here that might be right up your alley!" Michael likes to say, lewdly.) This is my friend Pengyew's recipe, and given that he's a professional chef, his version is insane: he makes it with tiny spare ribs, and you get served an artful few on a plate with a drizzle of mustard sauce--and then you start to look around to see if there are any crazy-heads at the table you should befriend because they aren't going to finish theirs; they are to Chinese take-out ribs what a diner tuna melt is to. . . a diner tuna melt, because really that's as good as it gets. Bad analogy. They're the Chinese take-out ribs you would get in heaven, where you might stop eating Vallarta carnitas for long enough to try one. 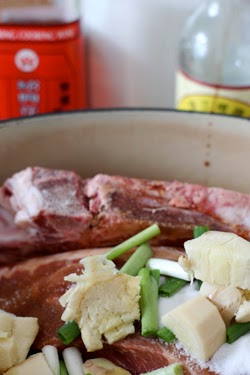 But I don't make this recipe Pengyew's way, partly because I don't have the patience to glaze all those little ribs, and partly because I am cheap, so I make it with country ribs, which are an inexpensive and misleadingly named cut of meat. They're actually nothing like ribs; they're fatty, bony slabs of pork that are inclined to cook down into rich, succulent shreds, which is a quality I really value in a cut a pork. And this recipe is almost weirdly straightforward: you don't even brown the meat, you just dump it all into a pot and simmer the heck out of it, then you pull out all the weird pieces of bone (it's fine if your country ribs are boneless), then you cook it some more until the liquid has reduced to a glaze, and the pork is a mix of chunks and shreds that are now frying in their own fat. Yowza.

Serve it over rice, or use it as a taco or quesadilla filling; your kids will love it because it's perfectly sweet and salty, with an intoxicating hint of that Chinese ginger-scallion seasoning. And once you've made it, you should try making it other ways. My friend Nicole (the other half of the pig couple), just made it, swapping in orange and lime juice, sliced onions and garlic, and a jar of green salsa for the other seasoning ingredients (you still need the water). When we served the tacos made out of it, a hush fell over the table, which is an unusual phenomenon with kids. "The pork is really good," Ben said. The same Ben who gets skinnier by the second despite the fact that he eats like a polite teenaged horse. "Is anyone going to eat that?" he asked, with his mouth full, gesturing at the last taco with the hand that wasn't already holding a taco, and Nicole said, "Go for it, Ben."

Time is the only hard part of this recipe: it simply takes a while to cook. However, we have pressure cooked it, which can turn that first hour and half into something more like a half hour; you still need to simmer it afterwards to reduce the liquid in the pot. Likewise, you could likely accomplish the initial simmer in a Crockpot, but you'd want to reduce the cooking liquid afterwards.

4 pounds country-style pork ribs (with or without bones)
1/2 cup soy sauce or tamari
1/2 cup sherry or rice wine
1/3 cup sugar
6 1-inch pieces of ginger, peeled and smashed with the side of a heavy knife
6 scallions, white and green parts both, cut into 1-inch lengths
6 cups water

Combine all the ingredients in a large pot and bring to a boil, covered, over high heat. Turn the heat down to a simmer and cook, covered, for 1 1/2 hours. Uncover and cook for another 1 1/2 hours, or until the meat is fully tender and falling off the bones, and there is barely any liquid left in the pot. Cool briefly, then pull the meat off the bones with tongs or two forks, discarding any fat or ginger hunks or other unappetizing lumps of anything you might come up. Return the meat to the cooking liquid in the pot, bring it back to a simmer, and simmer, stirring occasionally at first and then frequently as the liquid evaporates (you have to be super-careful that it doesn't burn at this point), until the meat is glazed and frying in its own fat; if you want the meat juicier and saucier, then skip this last step. Drain off any residual fat and serve.
Posted by BenBirdy1 at 11/15/2005 09:21:00 AM