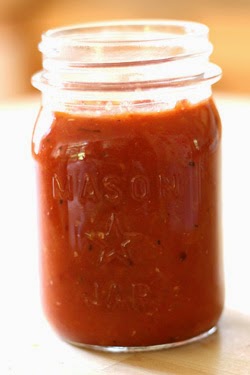 I feel like I'm living inside a tenth-grade drosophila experiment. The fruit flies are everywhere: clustered on the bananas, swarming the compost, flying up out of the drain in a way that makes me not want to think about what might be so exciting in the drain. But mostly, they are in love with the tomatoes. They dream about their ooze, read aloud to them from Lord of the Flies, sing them their phenotypical love songs, ogle them with their dominant or recessive red or brown or white eyes, caress them with the genetic mutations of their vestigial wings. It is a very juicy romance. And I really can't stand it. This cardboard box of gorgeous scarlet tomatoes, brought over by our friends still warm from their greenhouse, feels like a ticking time bomb. It feels like the first scene from a Hitchcock movie about a murdering infestation of insects, and creepy music is your only clue that you should be scared. It's just tomatoes, after all. Or is it?

And so: tomato sauce. Because, come the winter, when we are sighing with nostalgia for the summer's ripeness, I will be so thrilled to pull from my freezer a ruby block of sweet memories. This is an absolutely wonderful recipe for sauce, and I made it up in a fit of frustration after forgetting about a batch of stovetop sauce, which stuck and burned on the bottom of the pot. Here, you simply halve the tomatoes, drape them with some onions, garlic, seasonings, and olive oil, and then ignore them for two hours while the oven reduces them to a caramelized and sauce-ready pan of sweet flesh (sorry, drosophila!). A quick run through a food mill or blender, and the sauce is ready to eat or freeze. Easy peasy. And you can make it at night, if you like, the better to not be oppressed by the heat of the oven.

I usually make this sauce with plum tomatoes, which are meatier and quicker than regular ones, since you don't have to wait for the oceans of juice to cook down, but these worked just fine. And in truth, I've made the sauce with quite mediocre tomatoes, and it has still been good, since the long oven time really coaxes out their shy sweetness. Depending on where you live, this summer may not, in fact, be bringing you an abundance of tomatoes; blight has swept witheringly throughout the Northeast, and this may be all the sauce I put up this year. I like to use verbs like "put up" and "can" because it makes me feel very Laura Ingalls Wilder, as if I have a pantry lined with glistening jars. Which, in fact, I do: bread and butter pickles and peach jam and dilly beans and wild grape jelly. "Look!" I say proudly, to anyone who will look. "Is that money in the bank or what?" But tomatoes? I freeze them. I just can't bear the thought of everyone toppling to the ground and writhing with botulism all because I wanted to play Little House on the Prairie.

And if you freeze the sauce, as I do, in 1-cup portions, you can thaw exactly the right amount to make Mexican rice or tamale pie, to add to bean or lentil soup, or to sauce a half a pound of pasta or a couple of pizzas. And it tastes so incredibly vibrant, this sauce--so rich and essential, as if all the tomatoes in the world have been distilled into one red tablespoon of platonic tomato-ness. Even Ben loves it, despite his loathing of raw tomatoes. The two foods he hates are watermelon and tomatoes, and boy does he hate them. I like to probe the depth of this hatred--to find out, for example, if he would eat one tomato a day for a year for a million dollars (he would) or ten dollars (he wouldn't). What about a hundred dollars? "Hmm," he says, the gears in his brain shifting mathematically. "That's thirty cents a tomato. I don't think so. Unless it was a cherry tomato! Then I totally would." Fair enough. 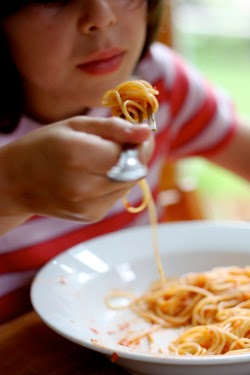 This recipe is for one pan, which makes 3-4 cups; I usually double it, and simple rotate the pans halfway through the cooking times so that they roast evenly. If I'm planning to freeze the sauce, I usually omit the herbs so that it can be used in either Italian or Mexican dishes without any conflicting flavors. A side note: try buttering your hot spaghetti before saucing: it adds so much delicious richness.

Heat the oven to 375. Slice the tomatoes in half lengthwise, then arrange them cut-side down, in one layer on a large, rimmed baking sheet (mine is 12- by 17-inches), lined with parchment paper, if you like, for easier clean-up. Arrange the onions, garlic and herbs over the top, then drizzle the whole thing evenly with olive oil and sprinkle with salt, sugar, and pepper. Bake for an hour and a half to two hours (or so), until the tomatoes are browning in spots and have fully collapsed. Around an hour in, the tomatoes will be sitting in a flood of juice in their pans, and then this juice will reduce as they cook further, which is what you want for a the thickest and most flavorful sauce.

Now you have two choices: put the contents of the pan (including all the juices), through a food mill: this will make a smooth, skinless and seedless sauce. Or else blend it all in a blender or food processor, which will make a good but more roughly textured and seedy sauce. Taste it: it will likely need a bit more salt, and more sugar too, if it seems acidic. Use it, or allow it to cool completely, then spoon into labeled freezer bags and freeze, or else spoon it into 1-cup containers and then, when these are frozen solid, turn them out into a large Ziploc freezer bag to store.
Posted by BenBirdy1 at 11/15/2005 12:45:00 PM