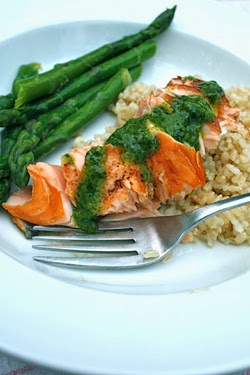 I got confused about fish and mostly stopped cooking it. That's what happened. I wasn't sure about the safety guidelines, for one thing: all those cut-and-save lists from magazines and organizations, and red means eat it and you'll keel over and die and yellow means eat it and your brain will liquefy slowly, and a sad-fish icon means "over-fished" and a sad-baby icon means "more mercury than the band Queen." 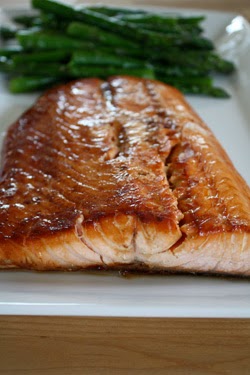 Also, fish is expensive. And over the years, the children have liked it sometimes and  disliked it others, and so it became simply easier to cook it rarely or not at all because nothing is more annoying than the moaning and gagging over a splurgey dinner. But, despite the creepy introduction here, I actually love fish.

So: Salmon. Pacific wild-caught. On sale at Whole Foods. And, most importantly: on the Environmental Defense Fund's handy chart, this fish gets a GREEN DOT! I know, right? That means "high in omegas, low in contaminants." Yay!

So, now we have the safe and wholesome fish, there's the whole cooking it issue. I tend to soak any fish in soy sauce and then run it under the broiler with a pat of butter: the fish ends up burnished to a beautiful mahogany color, and I feel like I can pull it out when it's done just the way I like it (which is very slightly rare on the thickest end--I serve my family from the skinnier end). Plus, I cover a pan with foil so clean-up is easy. 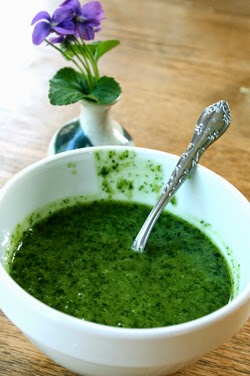 The vinaigrette is based (somewhat loosely) on the excellent recipe for "Cold Poached Salmon Tiles with Ginger-Black Bean Vinaigrette" in the late, great Barbara Tropp's fabulous China Moon Cookbook. The salmon would be very good grilled, but I have become convinced that my bosom gets in the way of grilling and am forced to leave it to Michael (Hel-lo, gender stereotype!).  Try moderate heat at around 5 minutes per side.

A note about ingredients: "Seasoned Rice Vinegar" is rice vinegar to which sugar and salt have been added, as for sushi. If you are using unseasoned rice vinegar, then add another teaspoon of salt and two teaspoons of sugar to the recipe, and taste the finished dressing to make sure it's balanced. Also, you will see "Fermented Black Beans" on the ingredients list, and you should feel fully free to pretend you didn't: they look like turds and they smell funny, and the sauce is actually fresher-tasting without them. But they're like the anchovies of the legume world, and they do add a bit of that funky je ne said quoi. Ours are "Yang Jiang (brand) Preserved Beans with Ginger." They come in a plastic bag inside a round yellow box in Asian Markets and even in the Chinese section of some large grocery stores. They're inexpensive and, like other fermented foods, they're already bad, so they keep forever.

for salmon:
1 1-pound salmon fillet, with skin (ask for it in one piece, preferably "center cut" so that it will be an even 1-inch thick)
3 tablespoons soy sauce or tamari
1 tablespoon butter

Begin by marinating the fish: Pat the salmon dry with a paper towel and run your fingers over it to feel for any bones, which you should yoink out with pliers. Now pour the soy sauce or tamari into a dish that will hold the salmon snugly and place the fish flesh-side down in it. Cover, and leave at room temperature while you make the vinaigrette, up to a half hour or so.

Make the vinaigrette: in a small pot on the stove (or in a bowl in the microwave), heat the vinegar and ginger together until it just comes to a simmer. Remove from the heat and stick it in the freezer to steep and cool while you clean the cilantro and prepare the rest of your ingredients (if you need to skip this step, you can--but I think it enhances the overall gingery-ness of the dressing).

When the vinegar/ginger mixture is cool, add it the bowl of your food processor along with the garlic, soy sauce or tamari, sugar, cilantro, and optional fermented black beans. Whir this mixture, scraping down the sides of the bowl as needed with a rubber spatula, until it looks quite blended and uniform. Now, with the motor running, slowly drizzle in the oil through the feed tube until it's all incorporated; this should take about 30 seconds of slowish drizzling. Taste the vinaigrette: it should be pleasantly tart and just salty and sweet enough: add more of anything it might need. Scrape it into a small bowl and cover while you cook the fish.

Broil the salmon: preheat the broiler, line a small, rimmed baking sheet with foil, and place the salmon on it, skin-side down. Slice up the butter and dot the surface of the fish with it, then broil close to the heat for around 10-12 minutes (more or less, depending on the thickness of the fish), until it is done to your liking. The salmon will brown and sizzle madly and the butter will blacken on the foil (fine), but if it seems like the fish is actually burning at any point, cover it loosely with foil for the remainder of its cooking time. Remember that the fish will continue to cook once you pull it out of the oven, and try your best not to overcook it: use a paring knife to peek at it--I take it out when it's just slightly translucent at its center, but you may want it cooked a bit more.