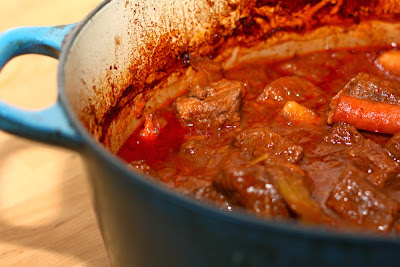 Brown is a nice color.

Did you grow up with this book? What is a Color by Alice and Martin Provensen, from 1967?  Oh, it's so, so good: funny little illustrations of funny little bits of text, interspersed with a moody, saturated spread for each color: "36 baby chicks and four yellow lions" for yellow, "ten thousand policemen" for blue, "five fire engines at a four-alarm fire!!!" for red. And a gentle herd of long-eyelashed cows for brown. When I started reading it to Ben and Birdy, it turned out I still had it memorized from my own childhood.

And I'm thinking of it this morning because this stew is the brownest thing I make; it is, to me, what brown tastes like. The chunks of meat cook forever, and they masquerade as cubes still--you can even spear one with a fork--but then in your mouth they fall into the heap of tangy shreds that they've actually become. A rich, savory sauce clings to everything--the kind that makes you run your finger around the rim of our empty dish and lick it. "Didn't you just remind me to use my fork?" a child might ask you, and you'll just have to shrug and smile the sheepish smile of the hypocrites.

But this stew seems like the perfect gift to give yourself this week: a hearty, warming meal with an absence of fuss--one that can simmer away while you wrap or bake, work or shovel or sit by the fire under a blanket, the house filled with the smell of the fact that later there will be dinner. It is warmth in a bowl, all comforting deliciousness. 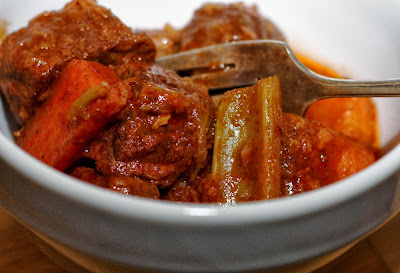 This makes a lot. The truth is that we were bringing half of it to a sick friend, and so I took the measurements from that vast amount. But you could easily make half as much--just keep an eye on the liquid, and prepare to add more as it cooks.

4 pounds of beef stew meat, cut into 1 1/2-inch cubes (I bought a single piece of chuck and cut it myself)
2 teaspoons kosher salt (or half as much table salt)
Freshly ground black pepper
3 tablespoons flour
3 tablespoons vegetable oil
1 large yellow onion, halved and sliced
1 cup red wine
2 cups plain tomato sauce (I use Hunt's) or tomato puree
1 cup broth (I use chicken, though beef might make more sense)
A sprig of thyme and a bay leaf
4 celery stalks, cut into 1 1/2-inch pieces, their leaves chopped
6 carrots and/or parsnips, peeled and cut into 1 1/2-inch pieces

Season the meat very well with salt and pepper, and sprinkle the flour over all of it, tossing the cubes to coat them. It's okay if some cubes are flourier or saltier than others; it will all even out in the pot.

In a large Dutch heat half the oil over medium-high heat until hot but not smoking, then
brown the meat well on as many sides as is reasonably possible. This is the only part of this dish that's a bit of a pain, and it just is what it is: you will need to do the meat in batches, adding more oil at some point, because if you crowd it then it will steam instead of browning properly. I do the meat in 2 1/2 batches: I add the onions to the pan with the final half batch of meat and stir and brown them while the meat is doing its thing across the way. Tongs are good for flipping the meat over, and you can adjust the heat if the meat is either not browning properly or if anything seems to be burning. Also, and I swear this is the last thing I'm saying about this, I actually deglaze the pan between batches because otherwise the bottom of my pot seems to burn: so after the first batch of meat is done, I pour half the wine into the pot, swirl it around and scrape with a spatula to get up all the nice stuff from the bottom, then pour it into the dish with the already-browned meat and heat more oil for the second batch, which I do the same way. Honestly, you're talking about a twenty-five minute investment in browning for immeasurable stewy pleasure later on. It's totally worth it.

Have you already browned the onions by now? If not, add another splash of oil to the pot and brown the onions for 5 or 10 minutes until they are nicely colored. Add the meat and its juices back to the pot, along with whatever wine you haven't used yet, the tomato sauce, the broth, the herbs, and the remaining vegetables. Bring to a simmer over high heat, then press a large piece of parchment down onto the surface of the stew--the paper should come up far enough that the lid will hold it in place--and cover the pot with a heavy lid. (If you don't have any parchment, skip this step, but expect to add more liquid at some point as more will evaporate).

Cook the stew in the oven for 2 to 3 hours until the meat is fork tender, checking on it every now and again to make sure that the liquid isn't on the verge of being entirely evaporated; if it is, add more broth or a cup of water. After it's cooked, taste the stew and add salt if it needs it, which it might or might not, depending on your broth.