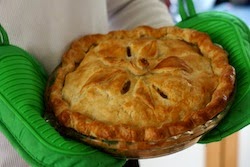 I have written before, I know, about Michael's New Year's resolutions and their amazing, er, concreteness. And so, with the end of the year looming suddenly, and with apple season in full, fragrant swing, Michael decided to learn how to bake a pie crust. Which was the entirety of his personal goals for 2010. Of course, fulfilling his resolution presented a direct challenge to one of my own: patience. I am just not that patient a teacher sometimes. Michael has these beautiful hands, these intuitive massage-therapist hands that work magic on the bodies of people in pain, people in need, people looking for the kind of experience that makes you groan, one minute into it, "Never stop. Oh, I'm already sad about the fact that you're going to stop at some point." Honestly. And yet in the context of the pie crust, it was as though he suddenly had ten thick sausages stapled to his palm. "Gently!" I admonished him, more than once, and he said, sheepish, "I'm trying." I'm sure it didn't help that I was snapping a million pictures, or just snapping in general. 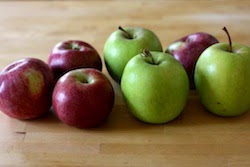 And yet: he found the overall experience to be a positive one, and he was thrilled with the finished pie which looked, there's no way around it, like a specimen from a magazine cover (or centerfold). And it tasted even better. 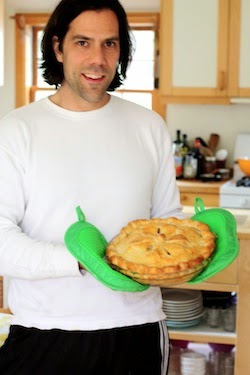 As I was teaching him, though, I started to understand pie crust's bad reputation for making people feel incompetent and afraid. There's a lot of that kind of hazy "not too much. . . but not too little. . ." precision that throws everybody. You want to mix the butter into the flour just enough; you want to add just enough water; you want to work it just enough. I know. It's a little stressful, and I tend to offer recipes here that are much more like, "between 1 and 16 tablespoons of butter" or "walnuts or pecans or something else crunchy that's not even a nut if you want." But if you are new to pie crusts and want to try making one, you should; this is as hand-holding a recipe that there could be for pie, and I'm happy to entertain any questions in the comments section here. If you need to, you can even fax me a photograph of your pea-sized butter bits so I can say, "Yes. Exactly like that. Good job, sweetheart." And then you can head into the holiday pie season full of the confidence of the capable pie-makers. 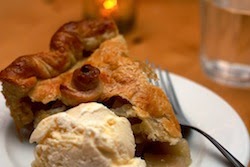 You could make this crust with all butter, if you prefer, but I make it this way--with (non-hydrogenated) shortening--because it's my mom's crust recipe and that's how she makes it (though now we both use lard when we can get away with it). Also, if you must add spices--I think that cinnamon, nutmeg, and cloves are the classic apple-pie trifecta--go for it. But don't come grumping to me when you can't taste the apples.

For crust:
3 cups of flour
1 1/2 teaspoons kosher salt (or half as much table salt)
2 sticks of butter (mine is salted), cut into 1/2-inch cubes
6 tablespoons of shortening or lard (I was feeding vegetarians and used shortening. Sigh.)
2/3 cup ice water (put some ice in the water, and when you're ready to use it, fish out the ice and measure the water)

For filling:
7 apples, peeled, cored, and sliced fairly thin
1/2-3/4 cup sugar, depending on how tart your apples are (we used 3/4, and I think I was the only person who thought it was a hair too sweet)
2-3 tablespoons flour (we used two, and our filling was on the juicy side, but that's how I like it; if you want perfect slices, with all the apples lining up like little beige mosaic tiles, use 3)

To make the crust:

Food processor method: Combine the flour and salt in the bowl of your food processor, then distribute the butter and shortening over it.

Pulse for a second or two at a time, 5 or 6 times, and then check to see what it looks like: you want to see a mix of butter sizes at this point: some should be the size of peas or even a little bigger, like, hm, the tip of your thumb, say, and some should be mealy and crumbly looking. If you see giant pieces of butter at this point--the size of dice still--then pulse a couple more times. Those butter pieces are going to create the flakes, though, so be judicious. Now dump the mixture into a large bowl, and proceed from the asterisk, below.

By-hand method: Combine the flour and salt in a large bowl, and distribute the butter and shortening over it. Use a pastry blender or your fingertips to work the fat and flour together. For the former, you're on your own, since I've never used a pastry blender; for the latter, you want to lift handfuls of the mixture up out of the bowl, then gently let it fall through your fingertips as you rub it lightly together. Eventually, you'll have a bowl full of clumpy lumps, some the size of peas or fingertips, some the size of fish-tank gravel and cornmeal, and this is perfect. You don't want to spend too long doing this, or the crust will be tough and unflaky; nor do you want the fat left so big that when you go to roll out it sticks all over the place and you curse me.
* Now, whichever method you've used, drizzle the ice water over the flour and fat mixture, and stir it with a fork until it starts to cling together in shaggy crumbs. Gather a little clump in your hand and squeeze: if it creates a shaggy dough, you're good to go; if it seems to dry to stick together, then drizzle another tablespoon or two of water over it, stir, and try again (this part's a bit tricky: too little water, and the dough will crack and break as you try to roll it; too much and your crust will be tough).
Dump it onto your clean countertop and gently gather it into two balls, squeezing and pressing and very slightly kneading just enough to hold it together.
Flatten each ball into a disk, wrap it in plastic wrap, and refrigerate it while you prepare the filling.

To make the filling:

In a large bowl, sprinkle the flour and sugar over the apples, and use your hands to combine. There. That was totally straightforward, right?

Heat your oven to 425 and roll the dough:

Sprinkle your clean, dry counter with flour, put an unwrapped disk of dough down, sprinkle it with more flour, and use a rolling pin to roll it thin. The thing is, this is more dough than you'll actually need, so the size is less important here than thinness. It should be about as thick as, geez, metaphors are eluding me. Glove leather? I don't have leather gloves, but I once did. About an 1/8th of an inch is what you're going for. Roll from the center out to the edges, pressing as evenly as you can to make a roundish shape, and checking to be sure the dough is not sticking beneath; sprinkle more flour as you need to, but cheat it as much as you can (sticking is a disaster, but too much flour will make a tough crust). If the dough tears, wash your hands and dry them, sit on the couch for a minute to take a few deep breaths, then patch it as best you can. 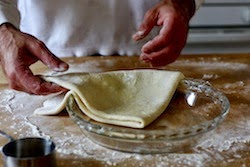 When the dough is rolled out, fold it loosely into quarters, center the point in the bottom of your pie plate, and unfold it. Now lift the edges as you use the flat of your hand to press the dough down into the pan--that is, you don't want to just press down, or you'll tear it, so you want to offer it some slack and a certain generosity of spirit. 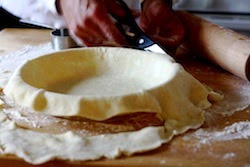 When the plate is lined, use a pair of clean scissors or a knife to trim it, leaving about an inch of overhang to make the fluted crust. 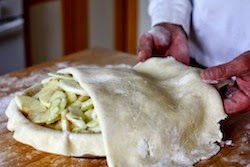 Roll out the top crust in the exact same way, then dump the apple filling into the pie plate, center the point of the folded-into-quarters top crust on top of it, and unfold it. Trim the overhang to match the one below it, then brush some water where the top and bottom crusts meet and press gently to seal. 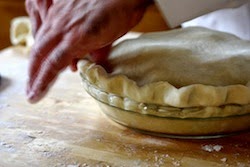 Tuck the overhang underneath itself (I realize, looking at the pictures, that Michael folded it up over itself, and this worked fine too) all the way around the crust to make a thick lip, then flute the rim by pressing it with your thumbs and index fingers all the way around. (You could crimp it with a fork instead, which might be a look you have some affinity with from your own childhood.)

Use a sharp knife to cut 4 or 5 2-inch vents in the top crust (to let the steam escape!), then brush the crust and edge all over with the egg wash. 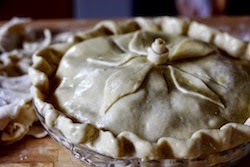 If you like, cut some of the leftover dough scraps to make decorations: apples, say, or leaves. I always roll up a little rose shape, because that's what my mother always did. 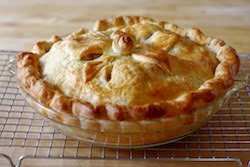 Bake the pie in the middle of the oven for 25 minutes, then turn the oven down to 375 and bake for another 30 minutes, until the crust is nicely browned and you can see the apple filling bubbling away through the vents. If the edges threaten to burn at any point, you can wrap a strip of foil around them, which is kind of a pain, but works. (I tented my little rose with foil for the last 10 minutes or so--though I think it actually would have been fine.) Cool the pie on a rack before showing if off and devouring it.

p.s. Gather the leftover scraps into a ball, wrap in plastic wrap, and refrigerate. When you've recovered from the pie experience, you can let your kids roll them out to make little jam tarts and chocolate chip pastries. Maybe I'll post a few pictures of this activity later in the week. . .
Posted by BenBirdy1 at 10/01/2005 05:51:00 PM