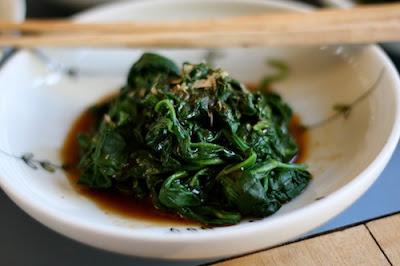 No, no--not Spinach Lipsmackers, so don't get all Bonne Bell on me.  It's just that I feel like one of those starving spring pioneers who wouldn’t have seen anything green for months, and then must have knelt in the damp dirt to bite shoots of grass and nettles. I’m starved for greens. I’ve been buying these enormous 1-pound bags of spinach that make either, like, a hundred thousand salads or 1 teaspoon of steamed spinach per person, your choice. But still, I love cooked spinach and have to make it sometimes. (I know, Mark Bittman wrote about this too this week, but he copied me, in a prequel kind of way.)


The Japanese Restaurant Spinach is still the number-one favorite of the children, on account of being so peanut-buttery and sweet. But I’ve been making a lighter version based on two factors: one, the dear reader who commented on the J.R.S., “Why do you have to be such a fusspot, cutting and balling up the spinach like a total freak?” or something to that effect. Eureka! I don’t! Here I just leave it in a tangle. And, two, the Hot Soy-Mustard Sauce on the grilled tuna I once ate at Roy’s, and which is like a dream I must have had because a) it was so delicious, b) I was so young, and c) Michael and I were in Hawaii. What?
Without further ado: the recipe. Oh, and I finally caught up on some commenting over on the vinaigrette post from last week. I love you guys so much.
Lip-Smacking Spinach
Serves 4
Active time: 10 minutes
Total time: 45 minutes
This spinach is just totally perfect in my book: salty, a bit sweet-tart, and with a hit of nasal heat from the English mustard. If you don't have Coleman's English mustard, use wasabi powder, which is its closest condiment cousin, or leave it out--it will still be good, better even than if you try Dijon or yellow mustard, which won't work here. For the heat averse (i.e. Birdy) a teaspoon each of the vinegar and soy is a great dressing. Oh, and if you don't have seasoned rice vinegar, then add a half teaspoon each of sugar and kosher salt to regular rice vinegar.
1 pound clean spinach
1 teaspoon Coleman's English mustard
1 teaspoon water
2 tablespoons seasoned rice vinegar
2 tablespoons soy sauce
Bonito flakes (or toasted sesame seeds) for topping
Cram all the spinach into a large lidded pot with a steamer and a half an inch of water in the bottom of it, and bring it to a boil over high heat. Steam the spinach until it is thoroughly wilted and collapsed--a minute or two. Leave it to cool in a colander while you make the dressing.
Stir together the mustard and water until smooth, then stir in the vinegar and soy sauce. There! You've made the dressing.
Ideally, the spinach will be cool enough to handle now. Gather it up and wring it out over the sink. Really squeeze it--you're going to end up with something around the size of a baseball, which is kind of demoralizing but totally fine! Squeeze and squeeze it. I even put mine in a clean dish towel and give it a gentle squeeze.
Now divide the spinach into four bowls and drizzle a tablespoon of dressing over each green pile. (Do you ever see those trucks that say A. Duie Pyle on the side? I mean, seriously that's the name of a company? "What are they, shit movers?" Ben asked intelligently enough.) Sprinkle each dish with bonito flakes, if you like, and serve.