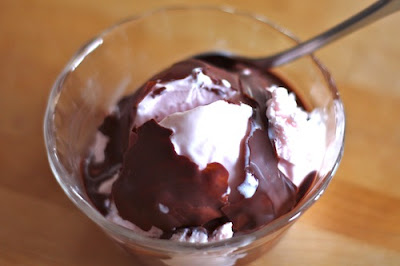 Is it hard to trust a person who, one weeks, talks about broccoli like it's the new sour cream-and-bacon Ruffles, and the next talks about dip-cone ice-cream topping like it's the new flaxseed-crusted spelt? Maybe. But I need to make a case for making your own dip-cone topping. Not because how else are you going to get your kids to eat their ice cream? But because you will be a hero for the night, recreating the melty, crunchy, delightful experience that the kids associate only with summertime and clam shacks. We had this for dessert last night, after a glorious dinner of bean bowls with mmm sauce. Perfect.

But you should also make it because--and here's where you need to stretch with me--it's sort of oddly healthy. Coconut oil is the new darling of nutrition folks because it turns out to be, as my jar boasts, full of MCTs. 62% MCTs, no less! Enough said.

No? Well, according to my 150 Healthiest Foods on Earth, of which coconut oil is a proud member, MCTs are medium-chain triglycerides, which your body prefers to use for energy, rather than storing as fat. (This is unfortunate if, like me, you were hoping to store more fat on your way towards the Guinness-Book Trunk-Junk title.) Not only that, but the MCTs in coconut oil are half made up of lauric acid, which is a massive virus and bacteria KILLA. Also, MCTs fight STDs which is A.O.K. if you are a S-L-U-T!
Plus, my brand is called EfaGold, which sounds like "effing gold," which makes me laugh. Get the extra virgin kind, and store it in the fridge, and expect it to make things taste a bit coconutty when you use it. As I have mentioned before, we pop popcorn in it, and it is utterly fantastic.
The single other ingredient of homemade dip-cone topping is dark chocolate, and we do believe, because they tell us it's true, that dark chocolate is full of antioxidants and antidepressants and antiunhappinesses of all sorts.

Ready? Here's what you do. Put 1/4 cup of coconut oil (I dig it out with a butter knife and estimate the amount) and 1/3 cup of dark chocolate chips in a heat-proof bowl or a mason jar. Microwave for a minute or two (you could, obviously, do this in a small pot on the stovetop), until the chocolate is almost melted, then stir until smooth. Drizzle over ice cream, where it will chill almost immediately into a delicious, crackable shell. Store the extras in the fridge and heat as needed.

I haven't tried flavoring it, but would like to: orange, I'm thinking, or peppermint. Yum!