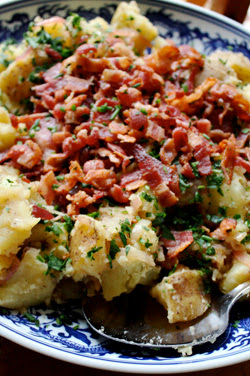 We interrupt this quinoa special with a word from our sponsor, The Bacon Lady. I know, it's a little helter-skelter, this food column, what with a recipe for bran timbales one week and marshmallow-Cheezit balls the next, but that's a little bit how it is around here. And bacon? Well. I'm sure I don't need to go on and on about bacon's charisma and magnetism. Either you eat bacon, and understand this perfectly well, or you don't eat bacon but remember it still, sighingly, in your dreams. If we were boating home together after the Trojan War, you would need to plug up your noses with beeswax and tie me to the mast of the ship so that I would not fling myself overboard at the first whiff of the siren song of the bacon smell (While smoked meat does not make an explicit appearance in Homer's Odysseus, it is widely believed, by me, that the sirens are a metaphor for the smell of bacon frying.) Turn the heat up under a pan of bacon, and the children will stagger into the kitchens, their arms leading the way like those of ravenous zombies.

Which is not to say that bacon is the key to my own loving of potato salad, because I am a nearly whorishly indiscriminate lover of potato salad. I love the potato salad my mom makes, which is similar to this one but (gasp) without the bacon. I love the potato salad to which we became addicted when Michael and I were still vegetarians, and not even (yet) the bacon-eating kind of vegetarians: the potato salad with chipotle-lime vinaigrette from the utterly fantastic Field of Greens cookbook--a potato salad that is still consistently requested of me at potlucks, and that is a little too spicy for most children, leaving more for the sane rest of us. And I love the classic kind of potato salad with mayonnaise and lots of hard-boiled eggs chopped into it and sometimes sugar even. Oh I love that kind. At the lake house we were just visiting, our friend's mother made a gigantic bowl of this very kind of potato salad--it was to be for dinner--and then left to spend the day golfing while we peeled back the plastic wrap and studied the salad and tried to figure out if we could tunnel under the beautiful garnish of egg wedges and paprika and dig some out for our lunch without anybody being any the wiser, which, no, we could not.

I'm running this particular recipe, though, because the bacon is a great lure for skeptical children, like a smoky worm wiggling out from the hook of potato salad, and most kids can be persuaded to harbor a serving on their plates if only to pick off and eat the bacon, which is, at least, a start. (I was going to call bacon the "gateway to potato salad" but then dimly recalled that I'd already called it a gateway to something else, and so Googled "Catherine Newman bacon gateway" and got 306 hits. I guess bacon is the gateway to all kinds of thing!) Also, because the onions are briefly sautéed and marinated, the kids won't have to fear any inadvertent chomping into the spicy crunch of raw onions. Not that they love the onions this way either--but at least these can be discreetly piled to the side of one's plate (see photo) without contaminating everything in their oniony path.

If you are not (yet) a bacon eater, go ahead and make this, but substitute olive oil for the bacon fat, and add a teaspoon of smoked paprika or chipotles. It will still be delicious. Plus, swapping righteousness in for porky crunch is a pretty good trade-off, as I recall.

Warm and Smoky Potato Salad
The measurements are somewhat approximate here, which means that it is as important as ever to taste the salad--as you're making it and before you serve it--to make sure that it is adequately salted and seasoned. Should I write a cookbook and call it Not Undersalted Foods? Maybe. (Note: if you are vegetarians, make this potato salad instead.)

2-3 pounds Yukon gold potatoes, washed, then halved and/or quartered (halve the smaller ones and quarter the larger ones; you can leave the wee babies whole)
Kosher Salt
1/3-1/2 pound sliced bacon
1 red onion, halved and thinly sliced
1/2 cup cider vinegar
1 teaspoon sugar
1 teaspoon Dijon mustard
1/4 cup (or so) chopped parsley
A few snips of chives, if you've got them

In a medium pot, cover the potatoes with a few inches of cold water, then salt the water heavily (when the salt dissolves, the water should taste salty) and bring it to a boil, covered, over high heat. Turn the heat down and simmer the potatoes until tender, around 15-20 minutes. The only way this won't be good--besides your stubbornly refusing to salt it sufficiently--is if the potatoes are undercooked. You know what I mean, when you take a bite and there is still a resistant something in the potato's heart of hearts. I am always more in danger of overcooking the potatoes, but then again, I don't actually care if they fall apart a little bit while I'm making the salad. Drain the potatoes and leave them in the colander to cool off and dry out for a few minutes.

Meanwhile, in a very wide skillet, fry the bacon over medium heat, turning as required, until it is crisp. Drain it on paper towels and evaluate the fat left behind: you want about a third of a cup; if you've got less, add a bloop or two of olive oil; if you've got more, pour a little off. Add the onions to the fat and stir over medium heat until they are just barely wilted, 2 or 3 minutes. Now add the vinegar, sugar, and 1 teaspoon of kosher salt to the pan and boil two minutes. Whisk in the mustard, and leave the onions to pickle briefly while you dice the potatoes. Dice the potatoes. In a large bowl, use a rubber spatula to combine the warm potatoes with the warm dressing/onion mixture, then taste for seasoning. Does it need more salt? More vinegar? The potatoes will absorb the dressing as they sit, so be sure to taste it again right before serving and re-adjust as needed. If you're not serving it right away, cover the potato salad with plastic wrap, and leave at room temperature. Only refrigerate it if you really must, as the cold will give the potatoes a weirdly leaden and mealy texture. Which is not to say that leftovers aren't good in their way. Just that it's better freshly made.