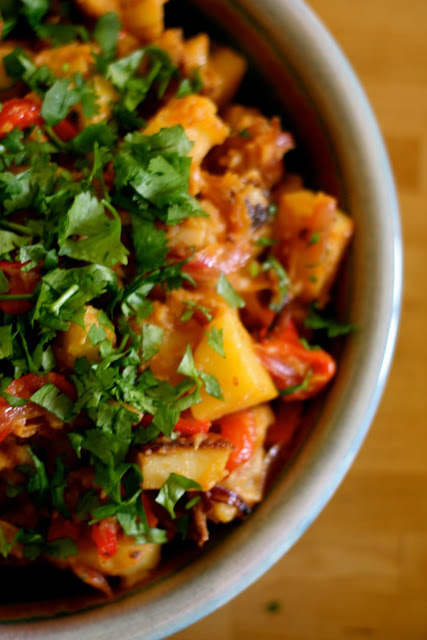 It only occurs to run this recipe today because you were so mad that I’d withheld the vinegar egg for so long—and this potato salad? I have been making it for almost 20 years. I happen to know that, because I made it the first time for a picnic we took to this concert. No wonder I’m so old! It’s on account of the oldness.

It is one of my signature potluck dishes. In fact, a friend of mine requests it so often that we mostly refer to it as “Becky’s potato salad” as in, “Do you want me to bring the bacon potato salad or Becky’s potato salad?” Like the mandatory green sauce I serve with salmon, it is one of the most transformative dishes I have ever made. It changed the way I thought about flavor, lo those 18 years ago, when I had to scour the entire Bay Area to find the tinned chipotles. (I ended up buying them from the Mexican grocer at the Ashby flea market.)

The potato salad is tangy and smoky and sweet and, oh, perfect in every way. Unless you’re a child, in which case it is unperfect in every way: spicy and sour, and filled with such slithery horribleness as peppers and onions. I can tell Ben is really growing up because yesterday he said, devouringly, “I can’t believe I used to not like this,” and I feel for him, for all those wasted years. We were eating it as part of our picnic lunch at Six Flags, where I went for the first time ever. I loved it! I will never, ever go back even if I live to be a hundred, which I won't, now that the Bizarro took 20 years off my life.

Adapted from the marvelous Fields of Greens cookbook. I always roast the peppers, but over the years I have done different things with the potatoes, depending on my mood. You can absolutely boil them in salted water and then dice them, and this is a classic and good way to make the salad, and it’s easier. Likewise, you can leave the onion raw if you like, but then I’d use only one, and I’d dice it. Annie Somerville roasts and then grills the potato, which sounds great. If spiciness is an issue, you could try making this with smoked paprika instead of the chipotle. If you want to add crunch, you can top the whole thing with roasted pepitas. All that said, this here is my favorite way to make it.

Heat the broiler and cover a small baking sheet with foil. Lay the peppers cut-side-down on the foil and broil them close to the flame until they are entirely black, around 10 minutes or so. Wrap them loosely in the foil and leave them to cool while you deal with other stuff. Turn the oven down to 450.

In a large bowl, toss with potatoes with 3 tablespoons of the oil and a teaspoon of salt. Spread them on a very large baking sheet that is either completely reliably nonstick, or that you’ve covered with parchment. They’ll be super-crowded, even a little heaped, and this is fine because by the time they’ve cooked through they’ll have gotten as brown as they need to, given that they’re getting tossed with dressing, not served as is. However, if this is too alarming for you, spread them over 2 sheets, and plan for them to roast shorter. Put them in the oven and roast them until they are completely tender and browning in spots or on one side or something, depending on whether or not you’ve turned them with a spatula in the middle of roasting them (I make a point of stirring them around once or twice). This will take around 45 minutes, but check them at 30 to get a sense of what they’re doing.

Meanwhile, cover that small baking sheet with foil again, oil it heavily with the remaining tablespoon of oil. Lay the onion slices on it carefully, then flip them so that both sides are covered in oil. If you have cooking spray, you can spray their tops if that’s easier. Pop them in to roast alongside the potatoes, and take them out when they’re browning but before they’re black, after 15 or 20 minutes or so.

Peel and rub the black skins off of the cooled peppers, then cut the peppers lengthwise into skinny strips and then crosswise into thirds so that you end up with 1-or 2-inch strips.

Now you’re an old, old woman. Put all the cooked potatoes, onions, and peppers in a large bowl, and add half the dressing. Fold it all together with a rubber spatula and then taste it. Add more dressing and/or salt until it tastes really good, then cover it and leave it on the counter until you’re ready to serve it. (Try really hard not to refrigerate it, because it is so much better unrefrigerated.) Now taste it again and re-season with salt and/or vinaigrette and/or chipotle puree, as needed. Stir in the cilantro, top with extra cilantro, and serve.

* To make the chipotle puree, scrape an entire 7-ounce tin of Chipotle in adobo (brands to look for include Embasa, San Marcos, Herdes, and La Costena) into the blender and puree it. Store it in your fridge in an impeccably clean glass jar where it will keep indefinitely—unless it doesn’t, which is what sometime happens. A thin layer of oil over the top seems to prevent mold from forming.