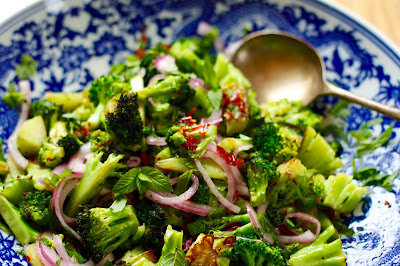 I picked a fight with Ben. It's hard to explain what happened, exactly, because parenting him is so easy-breezy. He's practically an adult, and all you need is the lightest touch--just plenty of food, a credit card number for his standardized tests, the willingness to listen occasionally or offer the barest thread of guidance. Mostly he just wants to hang out and be the best person to have a conversation with, or bring his crazy caramelizing friends over so they can blow-torch various items in the kitchen after sprinkling them with sugar.

But this was like one of those dreams where you're on a giant trike, riding merrily through a meadow of wildflowers, only it's not a tricycle, it turns out, it's a steam roller, and you hear the crunching sound of glass Christmas tree ornaments behind you. 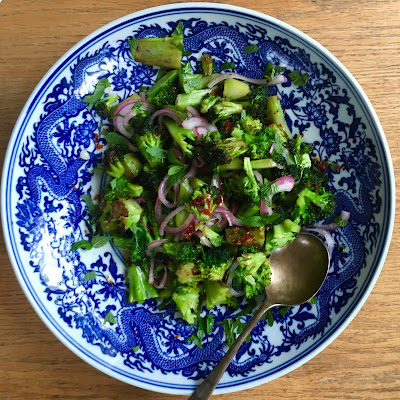 Do you know what I'm saying? Because one minute we were having a conversation, and the next minute we were having a wrenching conflict, and I felt terrible and confused. A bit later I called my friend Nicole, who lovingly said back to me the thing I always say to her: "Just because it feels bad doesn't mean you're doing something wrong." Which really is sometimes true and, in this case, either was or wasn't.

Ben is a sunny and forgiving person; we made up quickly. But he is tired and he is working hard, and all I have to offer sometimes is a really great meal. Our resident vegetarian was at a friend's house, so I made these ribs and the famous plum cake--GF, natch!--with plums I'd had the foresight to freeze when our tree was laden, and this here broccoli salad. 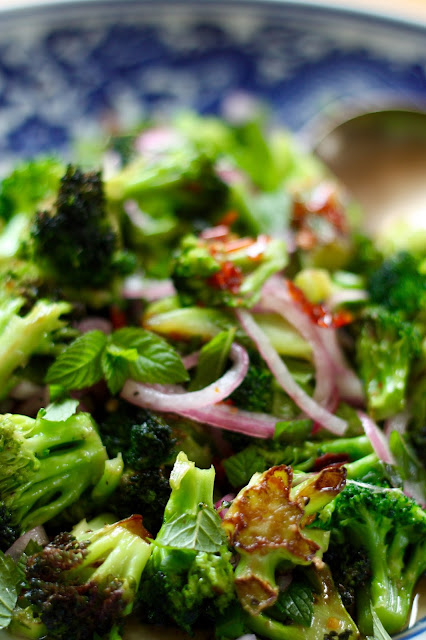 It's really extraordinarily good. Tender and crunchy, herby, spicy, and sour, and flecked with plumped, jewel-like chile flakes that have gone syrupy in the sweet-tart dressing. Also, it's gorgeous. Ben, because he is a darling, claimed to be the best broccoli he had ever eaten in his life. And, because I wanted to, I believed him.

Charred Broccoli with Mint and Pink Pickled Onions
This is loosely adapted from the fab Myers + Change At Home recipe for Sweet-and-Sour Brussels Sprouts. This would be so, so good with the called-for pound of halved Brussels sprouts, but I had broccoli from the farm share, so I used that instead, and then it was so good that I got more broccoli and made it again. I think that salty roasted peanuts would make a phenomenal addition to this dish, but we don’t have any at the moment. (Also, if you wanted to start with Crack Broccoli, and then just add the sauce, onions, and mint, I’m sure that would be good too!)

Combine the sugar, vinegar, and red pepper flakes in a small pot (use the dirty one from the pickled onion brine) and bring to a boil over highish heat. Turn the heat down and simmer until the sauce gets syrupy, around 3-4 minutes (or until you remember that you forgot about it because of the house filling with choking smoke). Set this aside.

In a wok or large, heavy, flat-bottomed skillet (I use the latter because my crappy wok sometimes makes everything taste like you cooked up a big batch of nickels), heat the oil over high heat until it’s shimmering, about 1 minute. Add the broccoli to the pan (it will spatter), and sprinkle with the salt and pepper, and then leave it alone for 2 to 3 minutes. Myers + Chang actually recommends walking away so that you won’t be tempted to stir or otherwise fuss with it, and I think this is great advice!

Once they’re charred on the bottom, cook them another 3 or so minutes, stirring a bit every minute or so, until they’re charred all over and the oil has more or less disappeared. If the broccoli is crisp tender by this point, great. Otherwise, add a couple tablespoons of water and cook, shaking the pan, until it’s cooked to your liking.

Put the broccoli in your serving bowl and toss it with the sauce, the onions (drain them first), and mint. Serve right away, or wait a bit, or serve it cold out of the fridge. It’s really, really good.

Pink Pickled Onions
The original recipe calls for shallots, and unseasoned rice vinegar. Whatevs. I figure that, because I don’t want to wait for the liquid to cool down, I can put an ice cube in it and thereby cool and slightly dilute it simultaneously!!!

Combine the vinegar, sugar, salt, and garlic in a small pot and heat over medium-high heat just until everything’s dissolved. Let it cool, or dissolve an ice cube in it, then pour it over the onions which you have put in a mason jar, then stick this in the fridge for at least an hour, but ideally more like 4 hours, and up to a week. It may not look like enough liquid, but when you check back a bit later, you can shake it around, and it will probably have become enough. (Metaphor! But what for?)
Posted by BenBirdy1 at 11/01/2017 02:10:00 PM