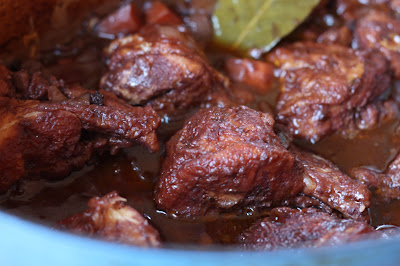 I am still shepherding recipes over to here from other places, and this is an old cold-weather favorite. Not just because of the warming deliciousness and the long cooking, but also because it's red-wine season, which means that we occasionally have a couple of inches left in different bottles ("Why did we not finish this?" I've been known to exclaim in the morning, mystified), and this puts it to good use. Take a little swig first, though, before you pour it in. Not just because of enjoying the little swig (although that) but also to make sure the wine tastes at least pretty good. I don't follow the "if it's not good enough to drink, it's not good enough to cook with" dogma, but if it's not *decent* enough to drink--like, you wouldn't even drink it if it were the only wine in the house and you'd been on hold with the cable internet people for 45 minutes while simultaneously writing an email about how most of the definitions on the SAT-prep vocabulary shower curtain were actually incorrect and also cat poop in the living room--don't use it.

This classic French stew gets its deep flavor from long cooking and red wine, maybe even the dregs from a few different bottles. Serve over polenta or egg noodles for the ultimate in comfort food.

Heat the oven to 325. Place the bacon in a large, heavy Dutch oven and set over medium heat. Cook the bacon, stirring, until it is browned and crisp. Remove the bacon to a plate and turn off the heat under the pot.

Dredge the chicken: stir the flour in a pie plate with 2 teaspoons of kosher salt (or half as much table salt), and coat each piece of chicken thoroughly, shaking off any excess.

Over medium-high heat, add a tablespoon of butter to the bacon fat in the pot. When the fat is hot, add the chicken to the pot in a single layer, without crowding, and sear on both sides, turning once with tongs, until a deep, golden-brown crust forms: 7-10 minutes total. Transfer the chicken to a plate and, if there's a second batch to brown, brown it, lowering the heat if the chicken threatens to burn at any point. When all the chicken is browned and removed to the plate, pour the fat out of the pan and discard, but retain all the nice browned bits.

Now add the remaining butter to the pot and, over medium heat, sauté the onions, carrot, and celery, stirring, until the vegetables are softening and flecked with brown, around 5 minutes. Add the tomato paste and sauté for a minute, and then add the brandy, if you're using it, and simmer, stirring and scraping the bottom of the pot until the liquid is almost gone. Now turn the heat to high and add the wine, vinegar, sugar, garlic, herbs, and 1 teaspoon of kosher salt, bring to a boil, and simmer over medium-high heat until the wine reduces by about half--10 or 15 minutes. Stir in the broth and reserved bacon and bring to a boil, then arrange the chicken in the pot in a single layer (our in any juices from the plate) and cover with parchment paper, pressing down so that the paper nearly touches the chicken and extends up over the sides of the pot. Cover with the lid, place in the middle of the oven, and braise for around 1 hour and 15 minutes, until the chicken is very tender and starting to fall apart. Taste the gravy for salt and balance, adding more salt, sugar, or vinegar if it needs a lift in any direction.