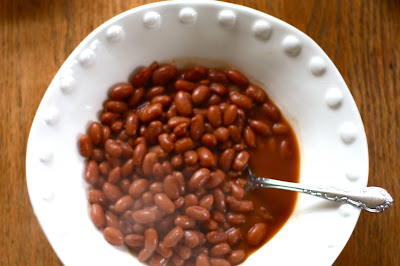 I know, I know. Buffalo and beans: my two favorite things! [Cue Etta James singing "At Last."] If it's not the buffalo wings, it's the buffalo cauliflower. If it's not the classic bean feast, it's the other beans or the other other beans. But for some reason, even though I tend to lavish my beans with hot sauce, I have never thought of thunking in a nice big knob of butter to do its magic Buffalo work.

But let me back up, because this isn't my own recipe, and it's not actually called Buffalo Beans. It's Orangette's, and it's called Creamy Beans, and she writes about them here. (You can trust her, because she is also a serious bean eater.) But let me back up again, because I didn't find the recipe myself; it was given to me, over and over again, by my friend Reyna, whom I've met only once, on a Facebook group I'm part of called What's for Dinner? that's made up of some number of women I don't know who log in at around 4 or 7 every day to say that they're making steak or stirfry or (more often than not) something with canned chickpeas (ahem). Or to say that they couldn't deal and got Chinese take-out or pizza or froyo. Or to say that their kids aren't home, so they're having wine for dinner or Pringles or wine and Pringles and candy and vodka. And sometimes the food they made was great and easy; it was terrible and easy; it was complex and fun; it was crushingly a pain, and they'll never make it again and the kids ran from the table crying and hid under the cellar stairs. I love my Facebook group and Reyna mentioned these beans enough times, and proselytizingly, that I finally made them. 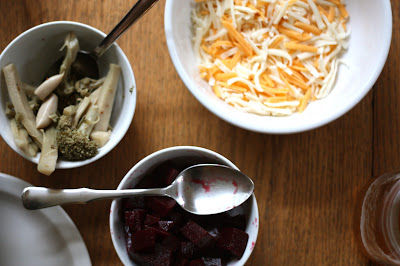 And I'm so glad I did because we unanimously loved them. I think I was supposed to cook them until they were creamier, but I loved them like this: burstingly plump beans, butter-rich and Frank's-tangy, like the punchline of a dirty joke about pintos and Buffalo wings. The recipe is for canned beans, but I pressure-cooked dry beans, because a) that's how I roll, b) they're cheaper, c) they're so, so good. But make them with canned: Orangette herself and everybody on Facebook likes them like that, and what could be easier? Typically, for the Bean Feast, I put out a million bowls of toppings such as diced avocado, cilantro, feta, lime wedges, good olive oil, and chopped onions, but for these I just put out some shredded cheese along with all the odds of pickled beets and pickled broccoli I was looking to be rid of. I wouldn't change a thing. Simple perfection. I will make them again (and, I'm sure, again).

Buffalo Beans
Adapted from Orangette's Creamy Beans. She includes an optional minced garlic clove that you can add with the butter and hot sauce, which I didn't try. She also recommends using pinto or black beans, but I've only made this with pinto. FinallY: she also has a note about the canned bean liquid being gross, and she knows that, but you really need to use it and it is OKAY.


4 (15-ounce) undrained cans of pinto or black beans (or 2 cups dried beans cooked, ideally in a pressure cooker in salted water, until tender)
4 tablespoons butter (I used salted because I gotta be me)
Frank’s Red Hot sauce

Pour the beans and their liquid into a medium saucepan. (If you’re using home-cooked beans, keep them in the pot and just pour off all but an inch or so of the liquid. Salt the beans if you haven’t already.) Stir to mix. Place over medium-high heat, and bring just to a simmer. Adjust the heat to maintain a gentle simmer, and cook, stirring occasionally, until the liquid has thickened and looks creamy and the beans are very tender, maybe even falling apart, about ½ to 1 hour.
Posted by BenBirdy1 at 6/04/2015 04:25:00 PM