Ottolenghi-style Chickpeas with Mint, Caraway, and Greek Yogurt (and Quinoa) 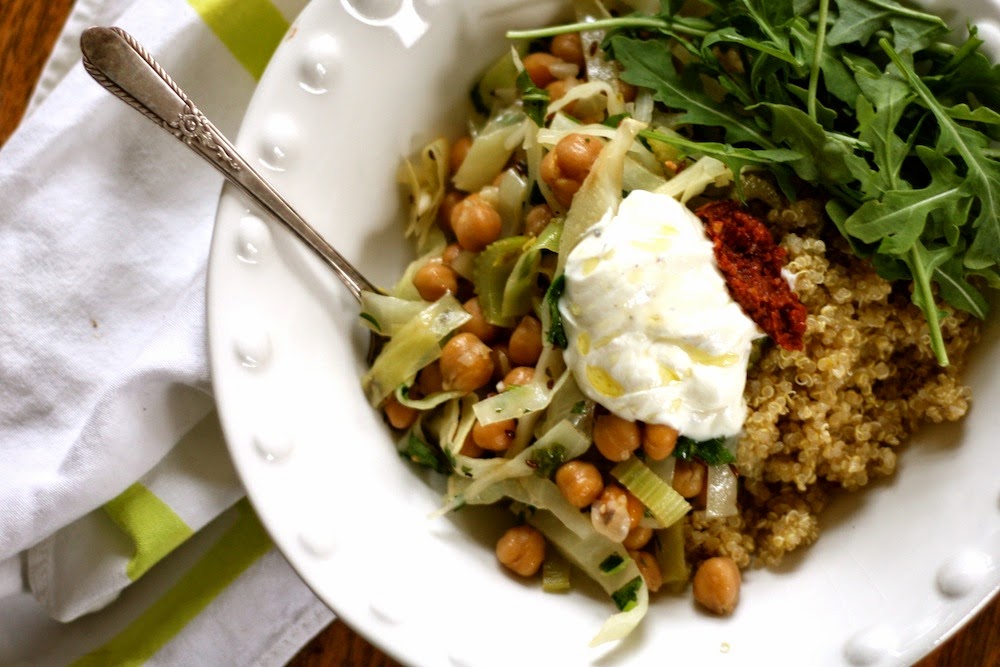 My friend Lydia is a therapist, and whenever I launch into this or that lament—inevitably something she’s heard 100 times already—she says, simply, “This is not new information.” Which really kind of puts a cork in it, if you know what I mean. And so I will tell you that my problem is never with cooking, it’s with having something to cook—but I will know that this is not new information.

The same way that every month I am suddenly bleeding all over my pants and couch or skirt and friend’s car or underwear and bed, and I’m like, “Blood?” every night it is suddenly six, and I’m like, “Dinner?” It just comes around and comes around, and I open the fridge and cabinet and peer in hopefully, as though the cartoon dinner fairies will have arrived to turn my life into a Disney movie of chicken breasts and broccoli and fresh mozzarella. But the fairies do not come. They never come. They are over at Rachel Ray’s and Giada De Laurentiis’s house, gossiping about my food moths and the filthy stove top, and I understand.

All of which is to say that I will often start cooking something from my tragic pantry, without a very clear sense of what it might become. Hence these (fabulous) chickpeas, which started as dried chickpeas in the pressure cooker, with a light bulb over my head that had yet to be illuminated and was slowly, instead, filling with beer. So I sat down with my Ottolenghi cookbooks. Not because I have the wherewithal to procure ingredients and follow an exact recipe and drizzle it with the tears of a pomegranate, but because his seasonings and combinations can knock me out of my ruts of chipotle/cilantro/lime or garlic/smoked-paprika/sherry-vinegar or soy/scallion/ginger, not that there aren’t worse ruts than those, believe me. Ruts like those, who needs smooth roads, right? Except, I’m also always arranging the same set of pantry ingredients into different constellations, and I’m so bored of myself I could cry.

Those three paragraphs could have been summed up simply with the words caraway and mint and olive-oily yogurt. Because that’s what the Ottolenghi recipe offered me. Sure, I didn’t have the dark leafy greens—only this ginormous green cabbage that I’ve been sawing away at for weeks. And I had celery instead of carrots, and I added a big handful or arugula because I couldn’t resist, and also served it with cooked quinoa. But I would never have thought to use the brilliantly fragrant, complicated seasonings he suggested. They turned out to be so fresh and delicious, it was almost like we were eating something new. It really was.

The original recipe is from the book Plenty and comes together quickly. It calls for carrots, which would surely add a lovely sweetness here, but I used celery, which is nice and aromatic. You could use only one of the herbs, if that’s what you have, but both make the dish quite spectacular. And, finally, he uses chard and blances it first but a) I didn’t have chard and b) I’m too lazy to blanch anything first. Here (and everywhere), salt is your friend. Don’t be shy.

For serving:
Arugula, harissa, olive oil, and quinoa (below)

Heat the olive oil in a wide skillet. Add the shallots or onion, caraway, and celery and cook over medium heat, stirring frequently, for 3 or 4 minutes. Add half the garlic, the cabbage, and the salt, and cook, stirring occasionally, until the cabbage is just barely tender, around 10 minutes. Add the chickpeas and continue cooking for 5 more minutes, stirring gently from time to time. Now add the lemon juice, the herbs and arugula, the rest of the garlic, and a large grinding of pepper, and remove from the heat. Taste and adjust the seasonings, adding more salt and/or lemon juice and/or herbs if it needs a kick. Serve hot, warm, or at room temperature, over the quinoa if you like, with a spoonful of yogurt sauce, a drizzle of olive oil, a handful of arugula, and, for the unfaint of heart, a nice, big dollop of harissa.

Quinoa
This is a less fussy than the one I used to use, which involved briefly steaming the drained quinoa over boiling water. Now I just let it steam briefly in the empty pot, covered with a dishtowel.

Kosher salt
16 ounces quinoa, rinsed if that’s what the package tells you to do
2 tablespoons olive oil
The reserved lemon zest (see above)

Bring a medium or large pot of water to a bowl over high heat and salt it heavily. It should taste as salty as the sea, so we are talking a fair amount of salt.

Add the quinoa, stir, turn the heat down to medium-high and cook it for 10-15 minutes, uncovered, until it is just tender and the grains have spiraled open.

Drain it really, really well in a fine sieve—I mean, really shake it around to get the water out—then put it back in the pot, stretch a doubled dish towel over the top of the pot, and put the lid back on. Leave it to steam for 5 or 10 minutes, then gently stir in the oil and lemon zest. (For other dishes, I might use butter instead of oil, and skip the lemon.)
Posted by BenBirdy1 at 4/30/2015 01:04:00 PM