Perfect Pasta for a Crowd

Most of the time, that is exactly how I feel. For example, what was I thinking, having only two children? I planned poorly. I should have had 5 or 6 children or at least 4. And more cats. More, more, more. Which is why, often, large or very large groups of friends are over at our house. Or we’re over at someone else’s house. And the deal used to be this: you could invite everyone over for an impromptu dinner, but you had to order pizza and not feel lame about it. That way, nobody had to worry that you were being put out. Plus, you maintained the happy social principle, which is that you’d rather be crowded around a pizza than hunched alone over a leg of duck confit.

Only, honestly, I’m too cheap to order pizza for 20 as often as I want people to stay for dinner. That’s a long way of getting to this pasta dish, which is one of the best and most satisfying ways I know to feed a large group of kids and adults. Add big green salad or a crate of clementines, and that’s it. You need nothing else. Everybody loves it. And recently, a young friend of ours said, “Oh, awesome! We always have this over here!” I took it as a compliment. Which was how it was intended.

Perfect Pasta for a Crowd
This is delicious. But: you really have to attend to the details here. That means really salting the water, really buttering the pasta before you put sauce on it, and really grating a pound of cheese. (It also means really waiting until bionaturae pasta goes on madness sale at Whole Foods.) Those small things elevate this dish from humdrum to utterly wonderful. You’ll see. (If you’ve eaten this at my house a million times, and are sniggering at the words “utterly wonderful,” I am giving you the finger, lovingly.)

A note on amounts: how much pasta you will need varies wildly, depending on how many people you have, how many of them eat a lot, and how good it is. Two pounds will feed around 10, and three pounds will feed 15 to 20. I know that makes no sense, in terms of the math, but I think that if there are lots of people over, then all the kids are too excited to eat much. (Just a theory.)

2-3 pounds good whole-wheat pasta shapes (as I’ve said before, I love bionaturae)
4-6 tablespoons butter
1 ½-2 quarts mild, tasty sauce (see below)
1 pound whole-milk mozzarella, grated (Don't use fresh mozzarella, because it's expensive and will be impossible to grate. Unless that's what you have, then do use it. Get a kid to dice it for you by putting chunks of it in an egg slicer each of the three direction, to make perfect little cubes. Fun and effective.)
1 cup freshly grated parmesan

Bring a very large pot of water to a boil, and salt it until it is as salty as seawater. This does not mean dainty sprinkles of salt out of the shaker; this means big handfuls of salt. Really. Salt the water, stir it, and taste it. Keep salting until it's salty. Aren’t I bossy? I’m sorry.

Cook the past according to the package directions, then drain it, put it back in the pot, add the butter, and stir until the butter melts and coats the pasta. Add enough sauce to coat the pasta thoroughly, then add a little more sauce, then stir in the mozzarella and pour the pasta into a large, greased roasting pan--not a lasagna-sized pan, but the 16-inch kind you'd usually cook a turkey in. (It’s different in the photos here, because I used meat sauce on half of it, and so used smaller pans.) Sprinkle on the grated cheese.

Put the pan in a 350 oven and bake for around a half an hour, although this part is forgiving. If you want to bake it for longer, because of timing or a hunch about what will taste best, you can cover it for half an hour, and then uncover it for another twenty minutes or so.

Basic Tomato Sauce
This makes a lot of sauce, which you need.

Heat the oil in a Dutch oven over medium-low heat, and sauté the onion and celery with the salt until everything is translucent and tender, around ten minutes.

Add the granulated garlic, and stir for just a second, then add all the remaining ingredients and bring to a boil over medium-high heat.

Turn the heat to low, and simmer for as long as you can, covered, stirring occasionally. In a pinch, it can be ready in twenty minutes. But an hour is better—or stick it in your crock pot and forget about it for a while! Taste, and add more salt, sugar, or vinegar to brighten or balance the flavors. 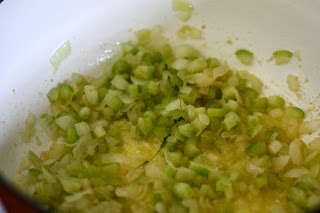 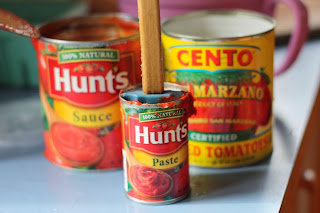 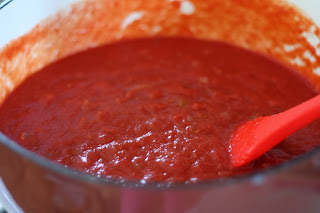 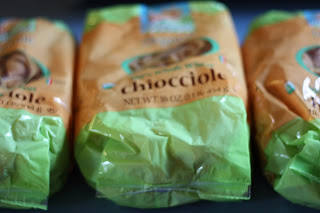 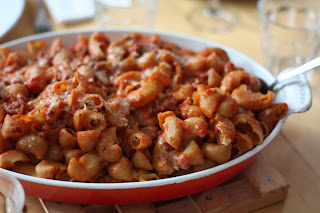