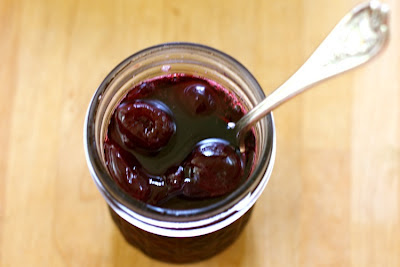 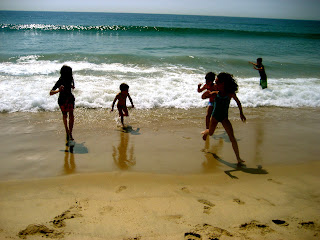 We came home to so much laundry that I don’t understand how it even fit in the car.

And also, to cherries, so good and so cheap that I had to make jam even before we’d finished unpacking. I’ve never made cherry jam before, even though it’s one of my favorites, because I can’t get sour cherries, and I’ve never really seen the point of Bing cherry jam. But I was wrong.

Because this jam? It is black and sweet, tart and bitter, fruity and almondy and gorgeous. I recommend bothering with the pit kernels, because that’s what will give the jam its incomparable almond flavor, and because it’s fun to crack the pits with a hammer—but if you really have too much laundry, then try adding a half teaspoon of almond extract. And if canning the jam just gives you a total heart attack, make freezer jam instead. Peach here, any-berry here. Those are especially good, because the fruit tastes better if you cook and sweeten it less than you need to for canning. But cherries and grapes lend themselves to long cooking and lots of sugar, I think.

Adapted from the beautiful, canningly pornographic The Blue Chair Jam Cookbook. This recipe is crazy involved, but the kids wandered in to help, and we really enjoyed ourselves. I can’t say I fully understand the whole rigmarole with the cooking of some cherries separately and straining out their syrup, but since I’d never made cherry jam before, and since I wasn’t in a hurry and the only extra washing-up it added was a sieve, I did it. I used the spent cherries to make dark and wonderful popsicles, which I recommend.

Figure out how you’re going to deal with your jars and lids and set up a clean canning station with a clean dishtowel, a paper towel for wiping jar rims, a clean funnel, and a clean ladle or measuring cup for transferring jam to jars. I sterilize my jars either in the dish washer (leave them in there and pull them out, still hot, when the jam is ready to can) or in a large pot of boiling water for half an hour. However, Rachel Saunders has this really cool method of sterilizing her jars in a hot oven: Place the perfectly clean jars and clean, unused lids on a baking sheet in a preheated 250 oven and leave them for 30 minutes. Remove them when you need them. (If they’re too hot—which you’ll know because the jam will bubble or boil in the jar, let the cool for a few moments before filling.) After you have filled them, leaving a quarter inch of head room wipe the rims with a clean, damp cloth, put the lids on and screw on the rims until just tight, then replace the jars in the oven for 15 minutes to ensure that they’re sterilized. Put them on a cooling rack; don’t jiggle them around; they’ll seal as they cool. If they don’t seal, freeze the jam or store it in the fridge and eat it. Now, that explained, I have never tried this method. I use boiling-hot jars which I pull out one at a time for the pot of boiling water and dry briefly with a super clean dish towel. I fill a jar with the funnel and wipe its rim with the damp paper towel, then I put on the lid (which I put in the boiling water for just a minute, and which I fish out with a magnet stuck to the bottom of a ladle) and screw on the rim. IS THIS TOO SCARY? First of all, it’s not. But second of all, feel free to scoop the jam into clean jars, leaving plenty of headroom, and then freeze it. {note:  You will still need to follow some other instructions, as I do not take this to be a thorough explanation of the canning process, and I don't want you to somehow manage to be the only person on earth to ever get botulism from jam. Also, just because my English mother doesn't process her canned jam doesn't mean you don't have to.}

Now make the actual jam. Put a handful of cherry pits inside a clean dish towel on the floor. Use a dish towel you’re happy to stain! Now tap them gently with a hammer, through the cloth, until you hear them crack. This is oddly satisfying. Open up the dish towel and remove the plump almond-like kernel from inside each pit and reserve; discard any shriveled ones and shake out the shell fragments. Do this in batches until you have 1 ½ tablespoons of kernels, then tie them up in a small piece of cheesecloth or put them in a fine-mesh stainless-steel tea strainer and set aside. (Note: in lieu of all this pit-cracking hoo-ha, you could stir a half a teaspoon of almond extract into the finished jam after you take it off the heat.)

Put a saucer with five metal teaspoons on flat place inside your freezer for testing the jam later.

Combine 3 pounds of the cherries with the larger amount of sugar in a large heatproof mixing bowl.

Put the remaining cherries and sugar, along with the water, in a very large heavy-bottomed non-reactive pot. It will boil up, so the pot really does need to be larger than you might think. Cook over low heat, stirring constantly with a heatproof rubber spatula (or a wooden spoon!) and inching the heat gradually up to medium, until the mixture boils, then cook 7 minutes more until the liquid has become thick and syrupy and the cherries look greatly the worse for wear. Immediately pour the cherries through a metal strainer so that the syrup drains into the bowl with the raw cherries. Press down on the cooked fruit to extract all of the juice. “Discard the cooked cherries” if you are clinically insane!  Otherwise, blend them with 1 cup of limeade, then freeze to make popsicles.

Add half the lemon juice to the cherry mixture, stir well, then scrape it all back into your pot, and add the pit-kernel bag.

Bring the mixture to a boil over medium heat, gradually increasing the heat to high. Boil rapidly, stirring every minute or two, for “10 to 15 minutes.” How will you know which? I didn’t, so I went for 12 ½ minutes, sensible girl that I am. Monitor the heat closely as you stir, and turn it down a little if the jam feels like it’s sticking. Between stirrings, use a stainless-steel spoon to skim the foam carefully off the top of the mixture. Again, maybe I don’t get out enough, but I find this oddly satisfying. Also, I always eat all the foam.

After 10-15 minutes, turn the heat off and let the mixture rest for a minute without stirring. Scrape all the rest of the foam off of it, then stir in the rest of the lemon juice.

Return the jam to medium-high heat and continue to cook, stirring frequently. Lower the heat as needed to prevent scorching. After 5 more minutes, you should start to test the jam for doneness. To do this, turn the heat off and fill one of your frozen teaspoons half full of jam liquid. Return it to the freezer for 3 minutes, then test it: tilt the spoon vertically to see whether the jam runs; if it is reluctant to run, then it is done. If it runs very quickly, cook it for another few minutes, stirring, then test again. Repeat until it’s done (mine took another 5 minutes), then turn off the heat and remove the pit-kernel bag.

Pour the jam into sterilized jars and process as above and according to the manufacturer’s directions.