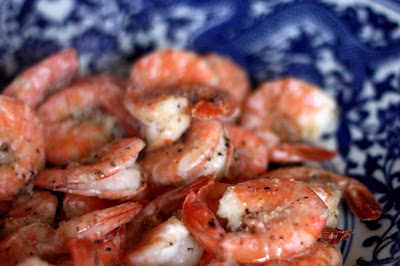 Holy pajoli, that was a beautiful outpouring of love and support, and I'm so grateful. Honestly. What would I do without you? I appreciate that so many of you wrote to family.com, and I laughed a little bit about some of the emails you cc'ed me on--many of which said, in essence: You stink, but you should hire Catherine back, even though she's too good for you and I hate you. Smiling isn't going to get my rent paid, but it sure lifts the gloom. To be clear: I am still writing for FamilyFun, which is a magazine that I love. I know it's not like you're going to spot James Franco reading it on the subway, or whatever, but the kids and I get tons of ideas from it. I'm just saying. And to be fair: family.com gave me enormous creative license when I was writing my recipe column for them, and I was very lucky in that way.

That said, I have a little bit of the writing version of that feeling when you take your bra off at the end of the day: ahhh. And you'd think, with my boobs hanging out, figuratively speaking, I'd post something totally crazy here today. Rice-pudding Pot Pie for 100! Pork Parfait! But no. I'm giving you this, which is, like, the world's simplest dinner, and makes for phenomenal gorging provided that one person in your family hates shrimp and so is eating only bread and cheese leaving a glut of shrimp for the rest of you.
The shrimp are addictively spicy and salty, and you'll want plenty of crusty bread for mopping up all the delicious spicy and salty (and oily) juices. I know I always say this, but: do use the full amount of salt. The point here is that you're salting the shells, and you want to get enough salt on there so that your fingers and the shrimp get nice and salty while you're peeling and eating. Does that make sense? If you were using peeled shrimp, you'd want to cut the salt way back, but I'm not sure by how much.
If shrimp don't speak to you, you could always have this meal instead: 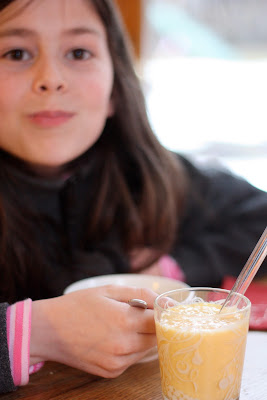 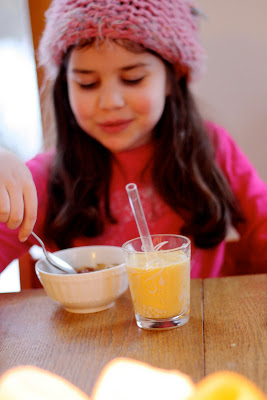 Granola and mango smoothies for dinner. It's a classy operation we're running around here.


Salt-n-Pepa Shrimp
Serves 4
Total time: 10 minutes
1/4 cup vegetable oil
2 bay leaves or kaffir lime leaves (optional)
1 pound large, shell-on shrimp, thawed if frozen
2 teaspoons kosher salt
1 teaspoon freshly ground black pepper
Heat the oil in a wide skillet over medium-high heat until it shimmers. Add the leaves, if you're using them, and the shrimp, spread them into a single layer, and sprinkle on half of the salt and pepper. Cook for 3 minutes, then flip the shrimp with a spatula, sprinkle on the rest of the seasoning, cook for two more minutes, and serve. 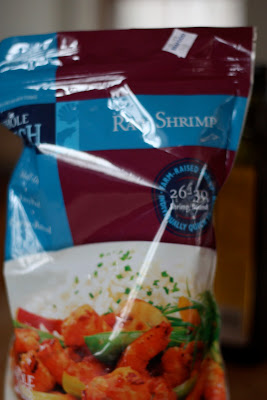 These are the shrimp I like, from Whole Foods. 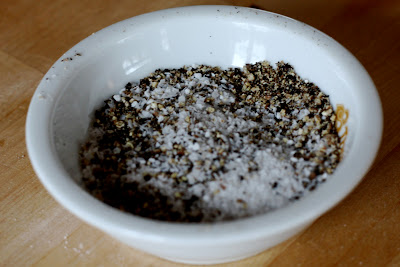 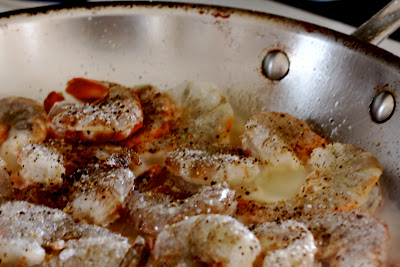 That's the shrimp before you flip them. 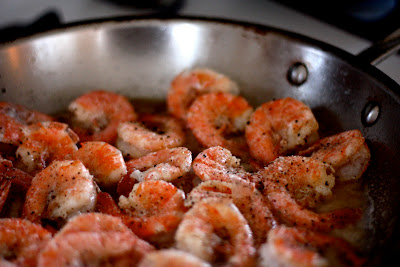 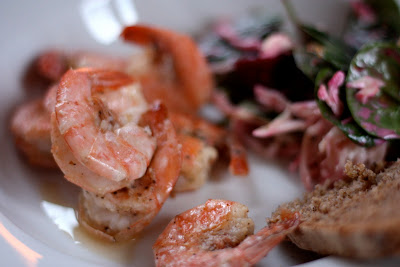 On a plate. With this bread and the world's yummiest salad: spinach tossed with leftover coleslaw and diced pickled beets. 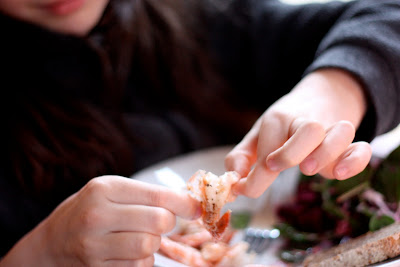 Ben is a lover of shrimps. 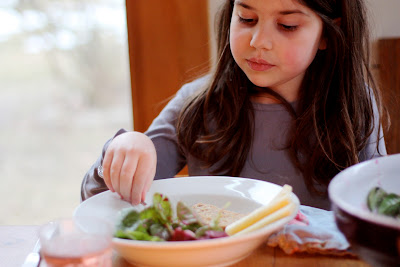 Birdy is a lover of cheese. 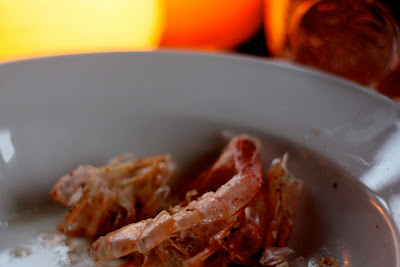 Thank you so much for stopping by.