Up until about a year ago, I was mentally insane. Because I thought—and often said—that it wasn’t possible, or worthwhile, to make good chicken wings at home. “That’s why God invented sports bars!” I announced, on my way to ours, to order buffalo wings, “extra extra crispy with an extra side of celery.” Which I still love to do. But I was very, very wrong about the possibilities of my own oven. I have now spent a year mastering the at-home wing and, finally, they are even better than the ones at the sports bar. Sacre bleu! But true.

There are two secrets, and here they are: salt and time—plenty of both. Basically, you salt the wings heavily and let them sit in the fridge for a couple of hours—ideally overnight or, less ideally, for the 20 minutes it takes your oven to preheat. I usually strike a middle ground in the 4-6 hour range. Then you put the wings in the oven and you leave them there to roast for a full hour, turning them halfway through—but only because you are bored and excited than because they actually need turning. Then you either eat them as is, because they are perfect, or you sauce them in any number of classic or high-end wing-saucing styles. That’s it.

What happens is this: the salt seasons the meat to the bone, and the long heat renders all of the fat so that a) there is not a speck of flab on the finished wing and b) the wings end up frying in their own melted fat, turning perfectly, magically crisp. It’s a magical kind of one-two—like how, when there’s a Monday holiday, not only do you get the day off, BUT ALSO the week is only four days long. Let me clarify, though: if you prefer wings that you’d more likely describe as “juicy,” where you are happily gnawing flaccid meat laced through with rubbery veins, these are not your wings. But if you like wings where the deeply golden meat pulls clean off the bones in crisp-chewy shreds, then this is your method, trust me.
But you need to take it seriously. Because if you do things to the wings before cooking them—marinate or glaze them, say, or do some other fancy thing because you don’t trust me here that simple is best—then that thing you did will get in the way of the fat melting, and the wings will never crisp properly and/or they will burn.
Okay? And you know I’m very live-and-let-live about everything, especially (with the possible exception of pizza toast) when it comes to recipes. You want to swap in pecans for walnuts, sub out cardamom for mace, use the sagging cabbage you already have instead of buying cauliflower? Great! But here: salt and time. The rest can come after. After, you can do whatever you like to the wings, and you’ll have created a versatile and delicious kind of a crunchy-perfect blank canvas for your favorite seasoning. I favor spicy: classic buffalo or harissa (see below) but the world is your wing. 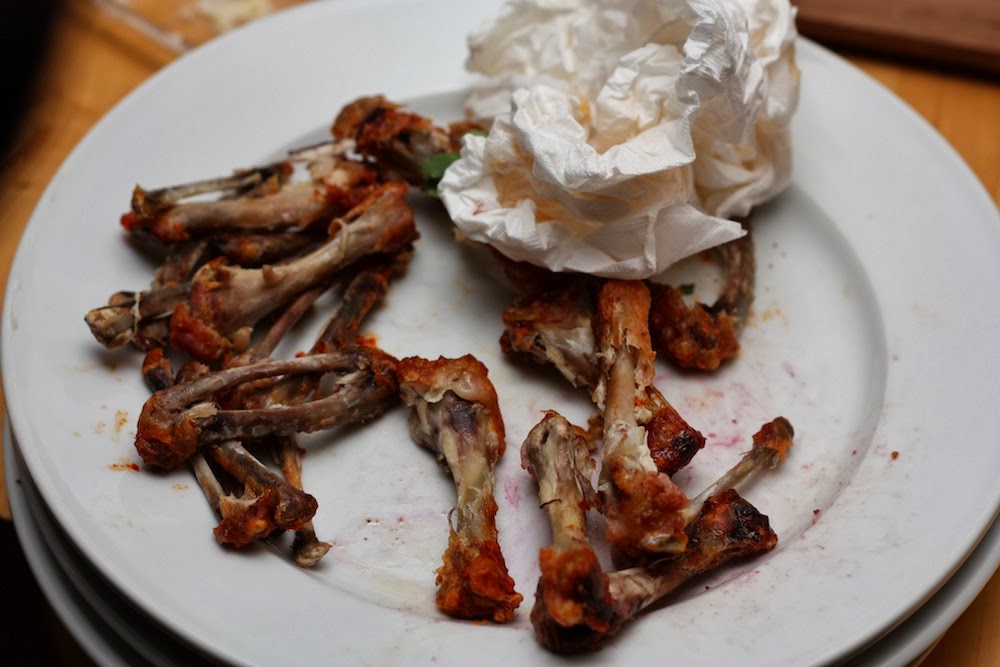 Chicken Wing Magic
This recipe can be easily multiplied. I usually double it to feed 6 serious wing-eaters with a couple unserious children thrown in the mix.

Line a large rimmed pan with parchment paper (or the wings will stick). Arrange the chicken wings on the pan and salt them, first on one side and then on the other. Use all the salt. Cover the wings and refrigerate them for 4-6 hours (or, more ideally, overnight, or less ideally, for less time). Look at the gross picture down below to see about how spaced out the wings should be; if they're too crowded, they'll do more steaming than frying, so you should spread them onto a second pan.

Take the chicken out of the fridge and start heating your oven to 375. Put the chicken in the oven and roast for an hour until the wings are deeply golden, very crisp and frying in puddles of their own fat. I use small wings, but if yours are larger, they may take 30-45 minutes longer. If they are not browning for some reason, turn your oven up 25 degrees. I flip the wings halfway through the baking, but I think it’s just because I want to interact with them. That’s it. Then you'll sauce and serve, without putting them back in the oven.

And then:
Some saucing options. I find that something like ½ cup of whatever will sauce 3 pounds of wings without drowning them—but by all means scale it up, if that’s your thing. Methodwise, what you want to do is put the hot wings in a large lightweight bowl with the sauce of your choosing, so that you can flip them around restaurant style, coating the wings lightly but thoroughly. All of these are good. 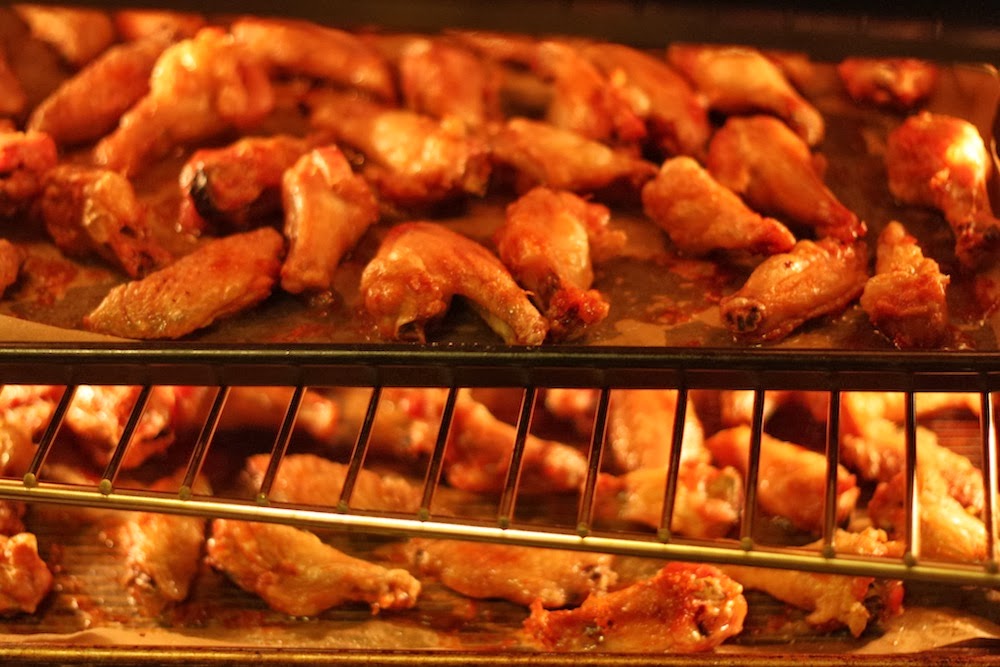 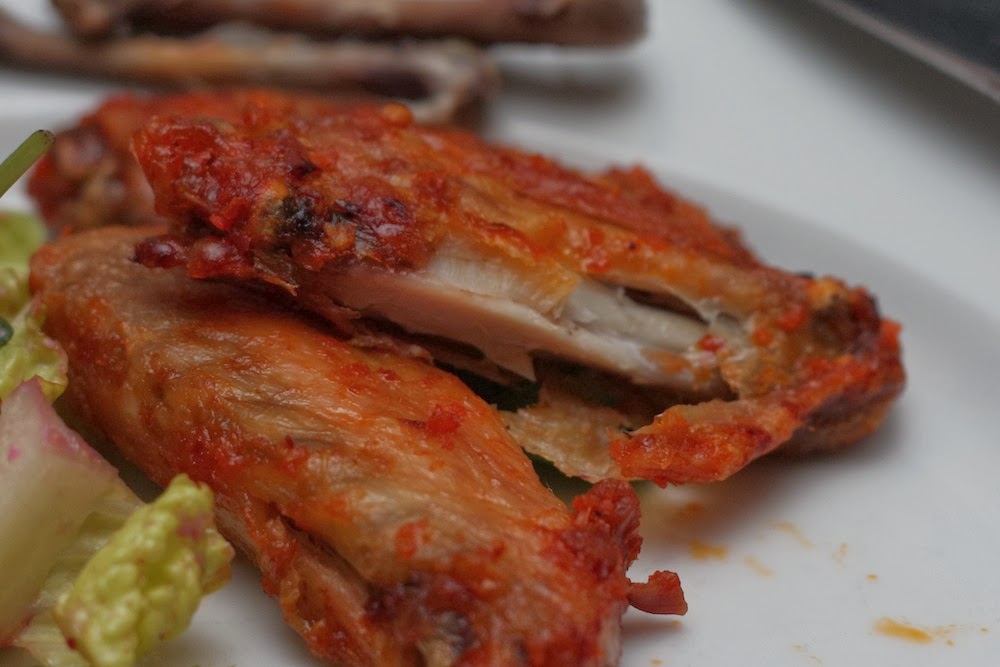 (I stuck these two gross pictures down here.)